Let's see if this lightbulb works!

Like I said in my last post...It seems like we have all the time in the world, but end up busier than ever with "not enough time" to finish "everything"! Well, not much has changed in the last month.

When we first got to this new spot, we had blazing fast wifi, then within a couple of days, it was almost impossible to open one single page. Those days started adding up from 2 to 5 to 9 to 10 days, after the 10th day I tried to get online but couldn't really get much done. We would have moved to a different spot, but we have people camping with us (rare) and couldn't move everyone, so we decided we would stay and just deal with it. Now, we figured out if we put the hot-spot in one certain area of the van, it works with almost no glitches...but it's kind of a pain in the butt spot, so I'm dealing.

I also decided I was going to try something different with my blog, so we'll see how that goes! It just seems like it takes way too much mental energy and time to sit down and write, write, write. It's truly exhausting. So, I am going to play around with some things and see how it goes. As I play around with this new way, I will be updating some things that have been happening around here....seems like a ton of stuff has happened in the past month, so it should be fun going through it all!

The weather has been roller coaster like, going from nice, hot and sunny for a week to rainy, cold and windy for 3-5 days.  This week we're on the down slope and ready for more rain on Tuesday, so we'll be bundling up for a couple of days. We would start moving South but we are tying up a few loose ends here first, then....we're moving on down! 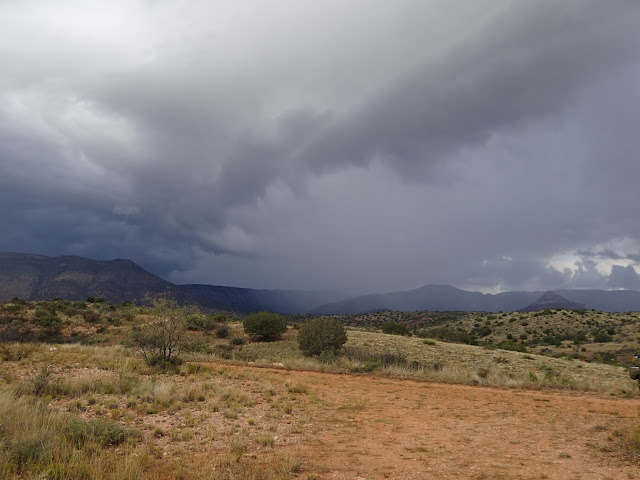 Tomorrow is supposed to be the last nice day for about a week and everyone will get together to watch football up at Camp Harris. Another major plus of the day will be seeing my friend Jess & her man, who are passing through from Denver. I haven't seen her in a year, so it should be a super fun visit!!

All the time in the world...No time at all!

Time has been slipping through my fingers lately. I feel like I just wrote a post, then when I come to catch up it's already been a month or over a month since my last post. It's funny how when you start living this lifestyle of freedom, you think you're going to have all of this time...haha, well for us, that's not so true! It seems like we still don't have enough time in the day, but it's all good because at least it's stuff we would much rather be doing. I don't know how we ever got anything done when we worked actual jobs!

We were camped around the Flagstaff area for the last month or so moving a few miles apart every couple of weeks.
My high school swim coaches were traveling through where we were camped and stopped in for a visit. 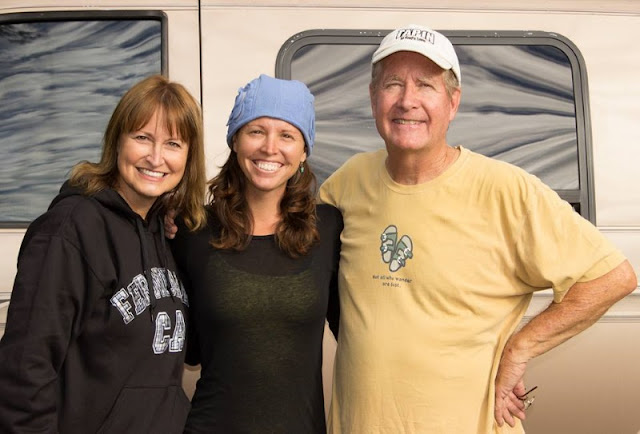 The night they camped with us, they were in a tent and wouldn't you know, it rained sooo hard, it flooded their tent! Between the highway noise, the 50 trains that went by during the night and the rain, they ended up leaving first thing in the morning...and it ended up being a beautiful day!
Figures! 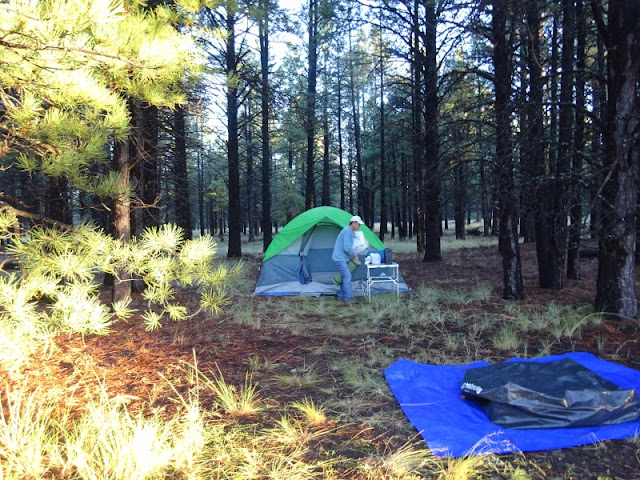 It was so great to see them, catch up and hang out, it had been almost 15 years since we last saw each other and it felt like absolutely no time had passed. 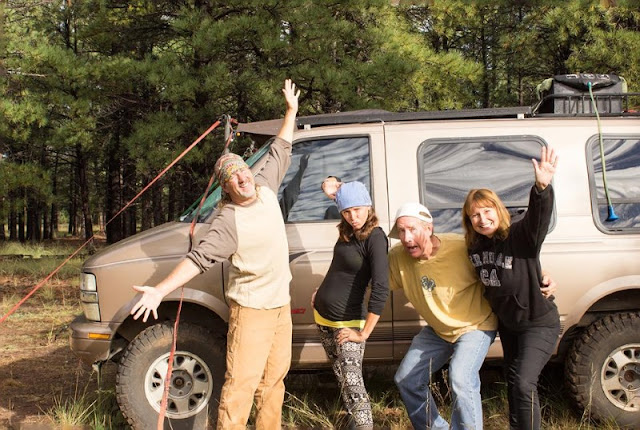 Over the past month, we were able to visit with many old friends and make some new ones. We usually don't see this many people until the RTR, so it was nice to be able to spend some one on one time together. And as I'm sitting here typing this, I'm also looking for pictures of those friends....guess we were too busy catching up and laughing I didn't take any...next time! 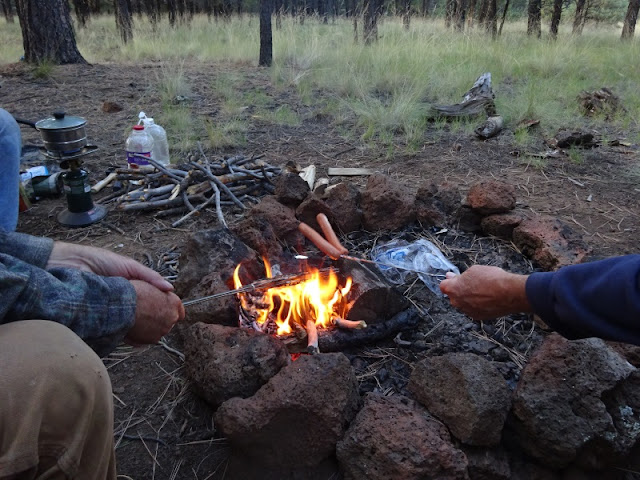 One of our friends, Dan, came to up to Flagstaff for a visit but also for the Lunar Eclipse of the Blood Moon. Not only did we have a great night, we watched Football (Bronco's won!), had some drinks with lots of laughs and tons of photography talk. I had to get all the tips I could, since Dan is THE man when it comes to photography!  Most of mine were a little grainy due to not enough light, but I was surprised I even got what I did. Here are a couple of my shots of the moon that night: 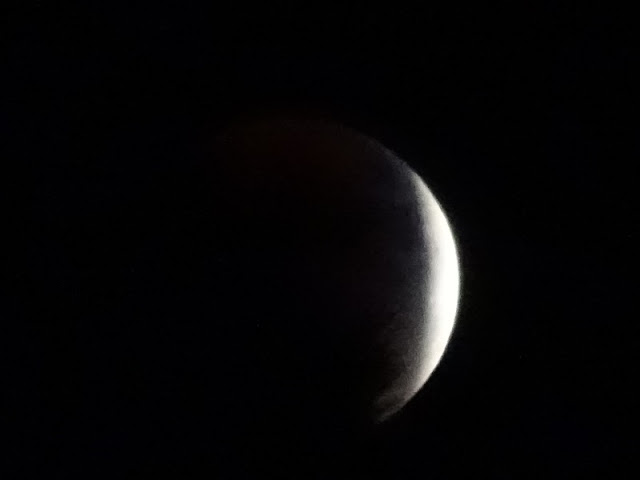 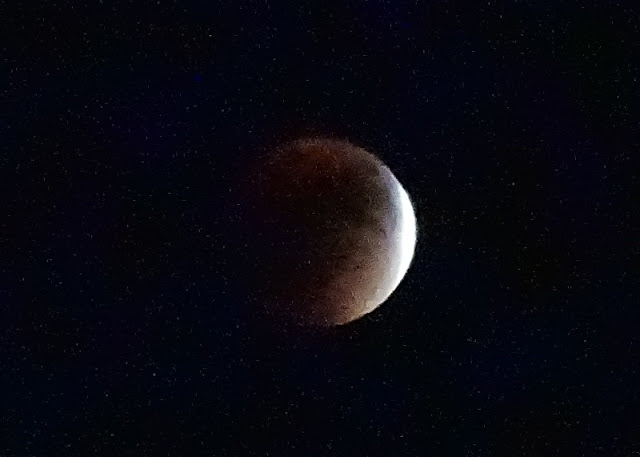 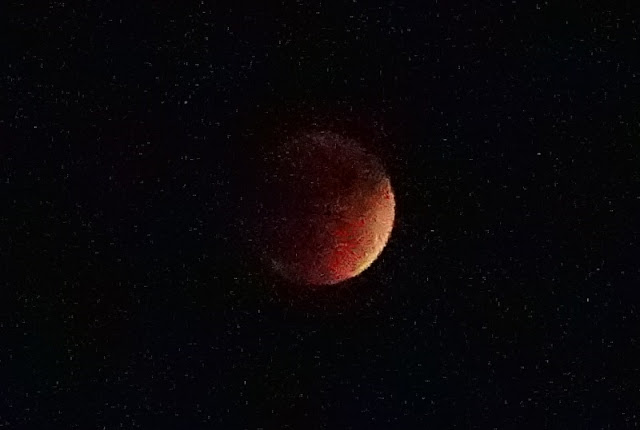 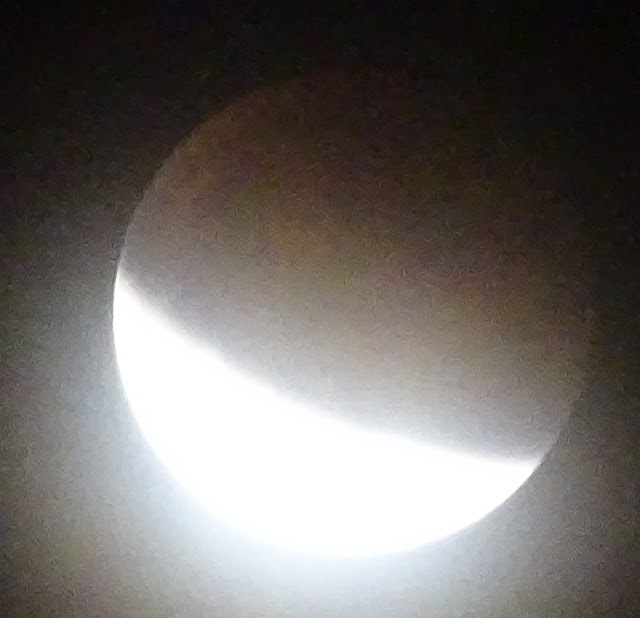 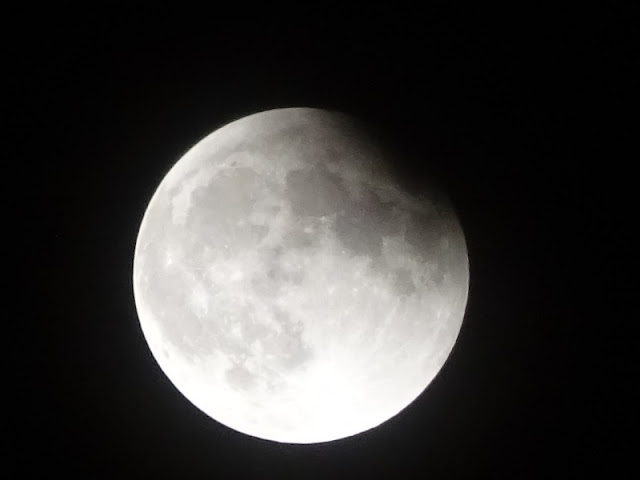 I am trying to learn how to draw and paint. I used to love to draw when I was growing up, but kind of lost the creative draw as I've gotten older. After watching Jamie do this oil painting on a Pronghorn skull, 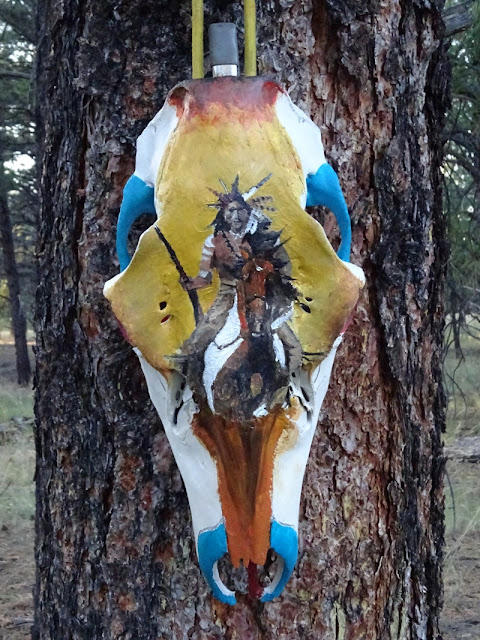 I decided it was time to re-train my brain. I'm starting small and easy with things I like or that I'd like to see every day. Here is a picture I drew for my "Desert Dad" or "Papi"...he was so proud he even hung it on his fridge in his camper! haha 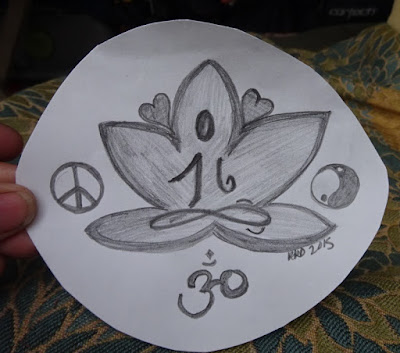 The critters are getting their fill of the last couple of weeks of nice weather. We went on a walk one morning and the ground and air were just teaming with movement. 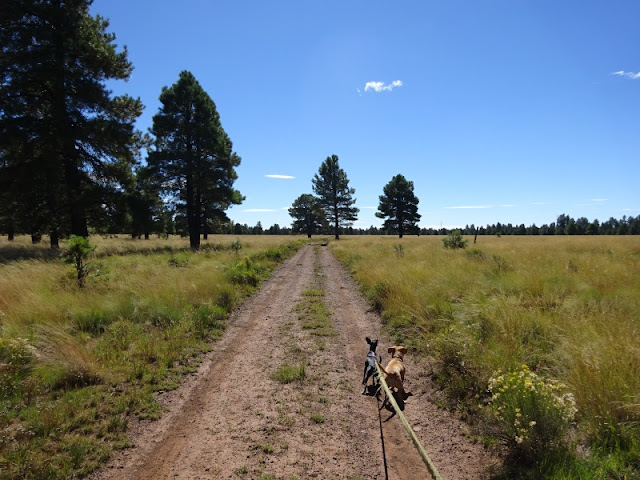 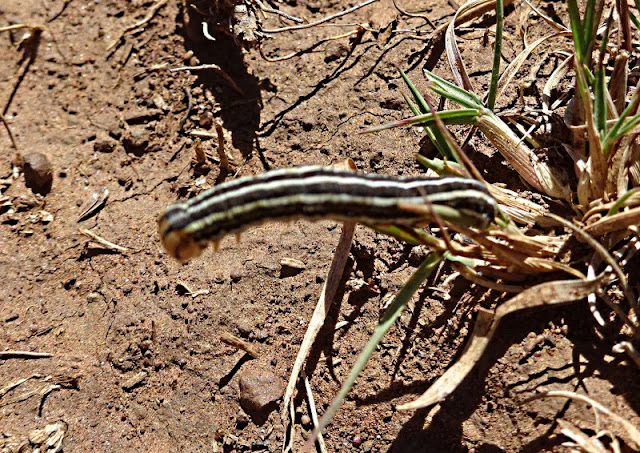 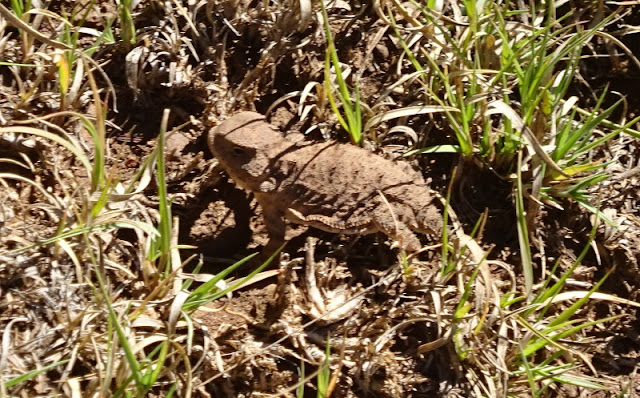 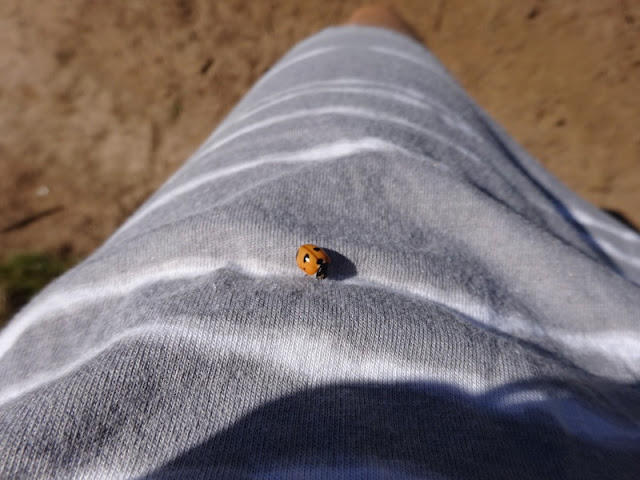 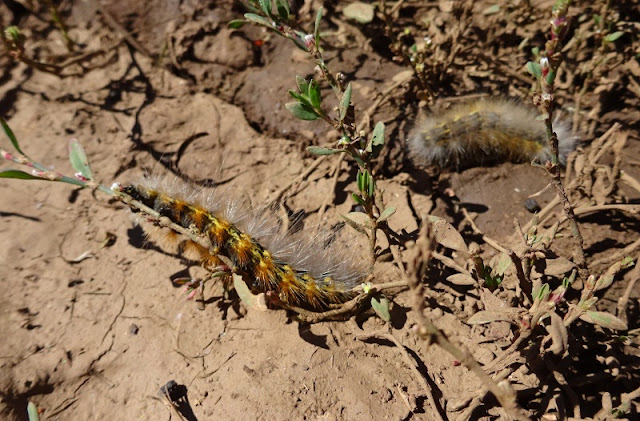 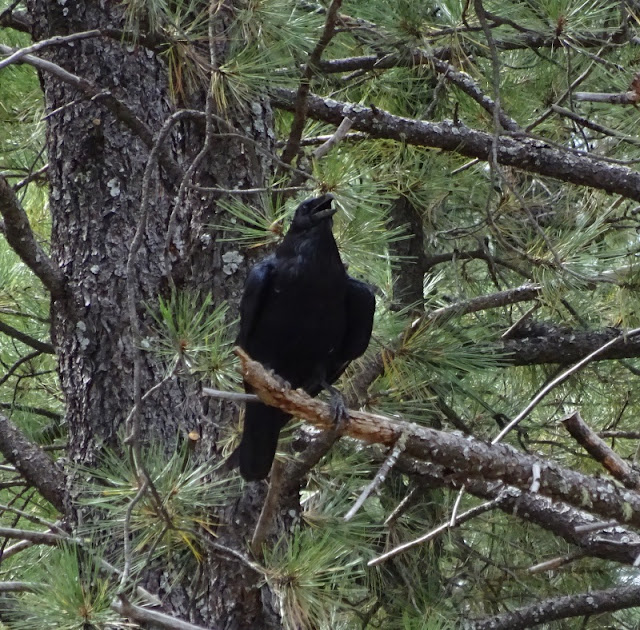 Guess we're all taking it in while it's awesome out!
The weather changed from being beautiful every day to raining on and off for a few days. We figured we would leave Flagstaff when it started getting cold, but sometimes that doesn't always happen like you want it to.
It didn't happen as soon as we wanted it to because, pretty much out of nowhere Jamie got the stomach flu. He was really sick for about 2 days and then was on the mend. I thought I was going to be free and clear because I wasn't having any symptoms and felt fine....until late in the day a couple of days later. It wasn't fun but I didn't get it half as bad as he did, thankfully! I think it also helped that we were camped with Bob & Judy and they rescued us with half of the pharmacy and some good "sick" foods. If it weren't for them, we probably wouldn't have healed so quickly. THANK YOU again you two, you're the best!!
While we were sick, the weather turned for the worst getting down to the low 30's at night and even wrapped in the warmest of clothes during the day, we were freezing in the mid-low 60's.  Oh, and it was raining! 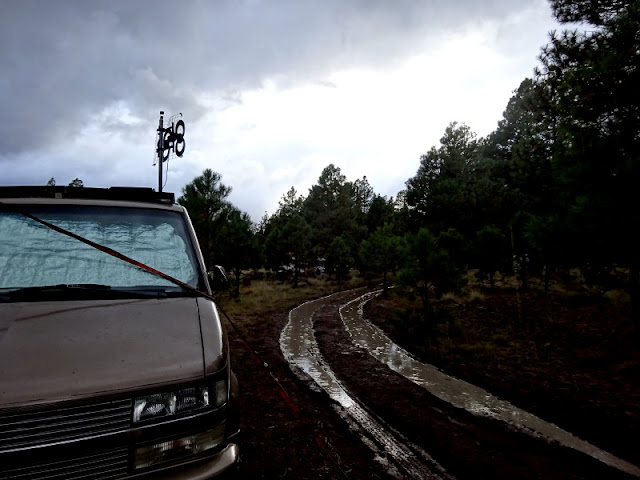 We stayed in bed a couple of days watching football and movies but once we both felt good enough, we packed and moved South to warmer weather.
Now we are sitting in 90* degrees, not a cloud in the sky. We have some friends that are meeting us here and saw some other friends on our way in. The next few weeks should be filled with fun, lots of laughs, learning, creativity and who knows what else. I do have a lot more to share but I'll keep that for the next post, which I will try to write in a couple of days.
Thanks for hanging in there with me, we'll see you soon!
PEACE