Day 5~ Santispac and a boat ride

While John and I were having our first conversation, after meeting yesterday, he offered to let us borrow his kayaks or to go on a boat ride in his boat. At the time, we were planning on leaving the next day so I thanked him and told him, if plans changed I would definitely be back! When I walked back to the van, Jamie was talking to two guys on dirt bikes. I walked into a conversation about the two guys, Al & Tom, taking Jamie on a dirt bike ride the next day...I guess they were wondering why the bike was still on the hitch and not in the dirt! Jamie introduced me to the guys and made plans to be picked up by Tom at 9 a.m. for a ride through Baja back-roads. The guys, both American, have lived around Mulege for many years. Tom lives on the next beach over, Posada, and Al lives in the town of Mulege. I then walked back over to John's and asked if he would want to go on a boat ride with me tomorrow, whether it be in the kayaks or in his boat...he was super excited and accepted!

The next morning I woke up and started getting both of us ready for our big days. There are some vendors that come by early in the morning, they aren't supposed to come before 8 a.m. but some do anyway. This morning, I was approached by a guy named Jesus (Hey-suess) and we bargained for his fresh made, piping hot Tamales. The morning before I bought 2 Tamales, that were freezing cold and not that great for 50 pesos. I paid 40 pesos for 4 Tamales with Jesus, and made sure I noticed what vehicle he drove and what he looked like, I would buy from him again! So, we had Tamales for brekkie and we prepared for the day. I made Jamie a lunch and walked the dogs. Tom came by right at 9 and grabbed Jamie for the day and off they rode.

I, then, walked over to John's with coffee and backpack in hand. Once I got to John's, Ava his purty lil' dog, greeted me and he came out to have coffee with me and talk about what we wanted to to do for the day. Since it was a pretty overcast day, we both decided it would be best and more fun if we went on a boat ride (with motor), this way I could see more and we wouldn't have to work so hard!


At about 10 a.m. he started prepping the boat. The pelicans really, really love his boat! They use it as a place to sit and hang out in the mornings, leaving nice droppings behind...so some cleaning had to be done before we could get in. I asked how I could help and he wouldn't hear of it, so I sat and watched while talking to Ava (yes, the dog).
John has a sweet little pulley system he rigged up so he doesn't have to enter the water if he doesn't want to due to being too cold or he just doesn't want to get wet...I get it, that water is a bit chilly! 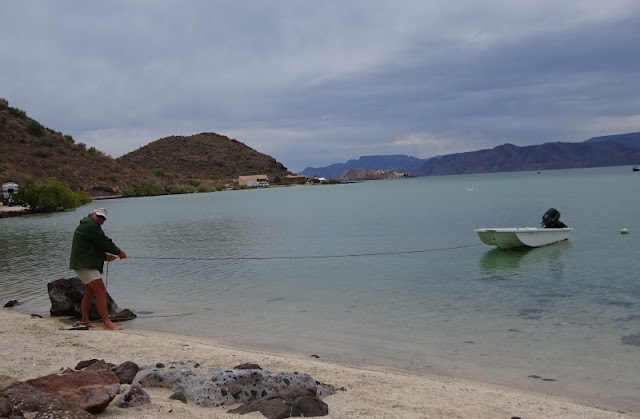 We set out on our adventure. Ava stayed behind to guard the shore, plus she won't get in the boat, John said he got her at too old of an age to change her so she stays home and protects her castle...she's a good girl!

John took me to 6 of the 7 islands in the Bay of Conception. The islands look a lot smaller from where we sit on shore, a few of them are quite large! It really was something else to see everything from the boats' view instead of just standing on land. The water is the most beautiful color of blueish-green I've ever seen and soooo clear! I felt like I was in a movie! 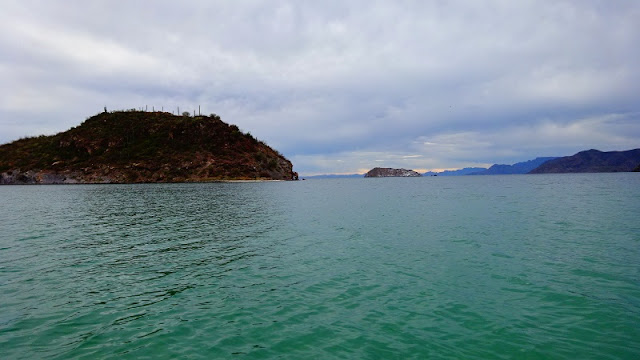 John was a boat captain in one of his many "lifetimes" ago, so he knows how to read the water and where to find certain things.


Since he's been in Santispac for 4 years, he knows so much about every little island he took me to, as well as the animals, housing, hot springs....pretty much everything.
I was getting my own private tour for nothing but great company and some good laughs.


We stopped off on this one beach, to take a little break and walk around. I shot some pictures of dead birds and fish and some cool shells. I asked him what this one 'thing' was, he told me it used to be a Blow Fish and proceeded to tell me when he sees them he throws them to a place where people won't walk and hurt themselves due to their very sharp thorns, that they use as protection. I'll always remember him telling me when he comes back in the next life, he wants to be a Blow Fish...because they are so beautiful and nothing can eat them! 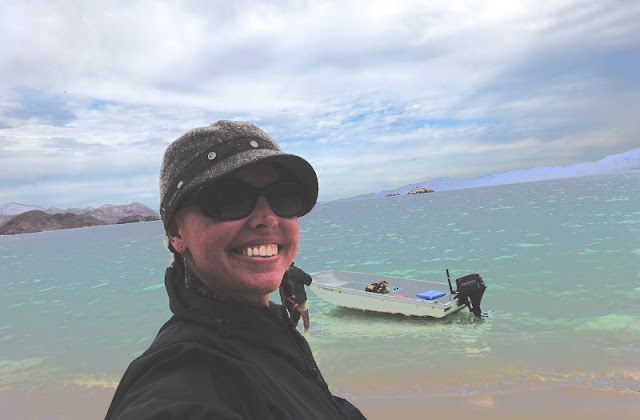 It was such a great time, I loved the company and I'm sure he did too, he has a daughter just a little older than me that he hasn't seen in a while. I felt like I've known John for years, it was a really nice few hours to spend together.

Once we got back toward Santispac, he motored me over towards the van so I could take some pictures of the van from the water and then took me over to the backside of where we are camped. There are a couple of beautiful houses there, a French couple built one and now I can't remember where the other guy is from...but they are nice, beautiful, expensive houses! 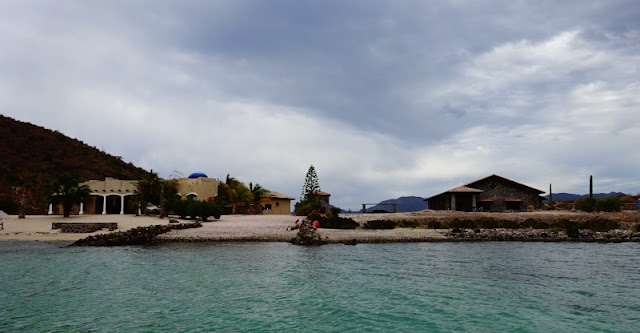 We then tried to go out toward the Sea of Cortez but it was just way too rough, so we turned back and went home.

Once back, John tied up the boat and we sat and talked for about an hour and a half until we both got hungry. I walked home and tended to the girls & had something to eat and he ate lunch and took a nap! 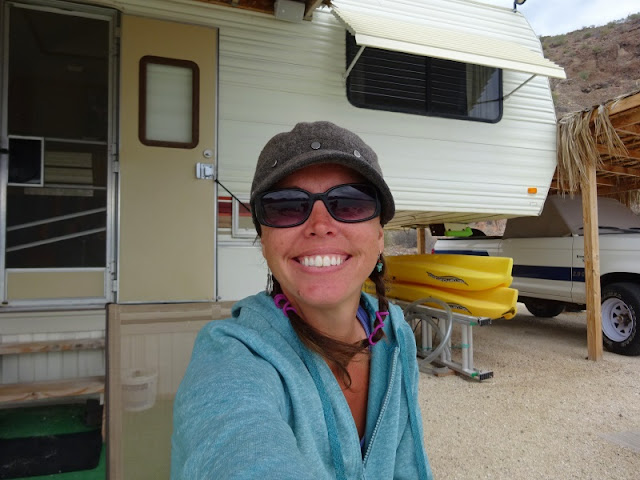 After a couple of hours, Jamie hadn't gotten back yet and I was getting antsy, so I grabbed the girls to go for a walk. I wanted to see what was on the other side of the houses we saw from the boat. It's a nice walk, but it was still a bit chilly so I had to put on my winter coat... kind of funny being in such a tropical place and looking like I'm walking into a snowstorm! I'm glad I had my jacket on though, for when I walked around the other side of this hill, the wind picked up even more and it got downright cold! 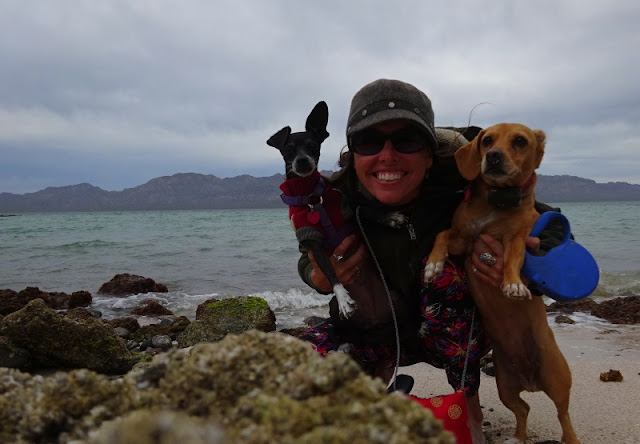 This side of Playa Santipac, is the Sea of Cortez side, which was like an actual ocean...big, strong, choppy waves, still beautiful in color but so different than the Bahia Concepcion. 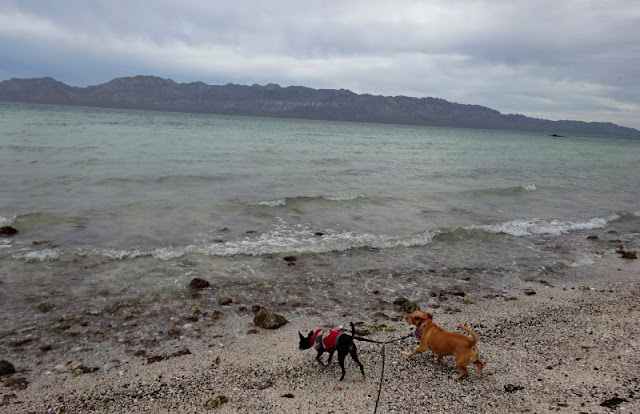 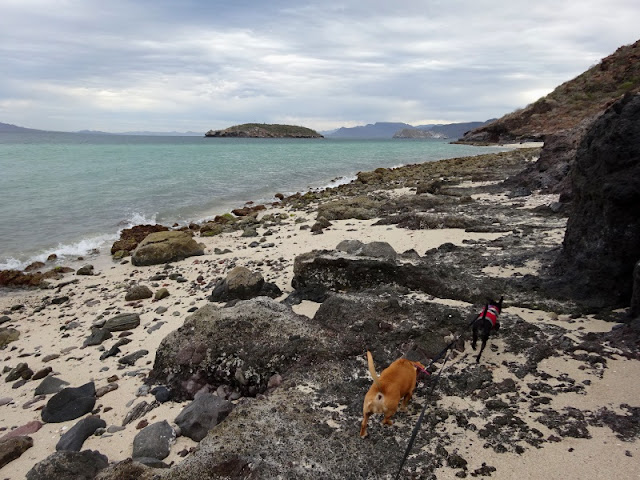 There were some big rocks up the beach and I just had to see them up close, so that's where we went. We walked across these big barnacled rocks, some with algae on them, coming to a rock overhang that was quite cool and blocked the wind so it was fun exploring around there. We sat here for a few minutes, enjoying the scenery, the rocks and no wind! 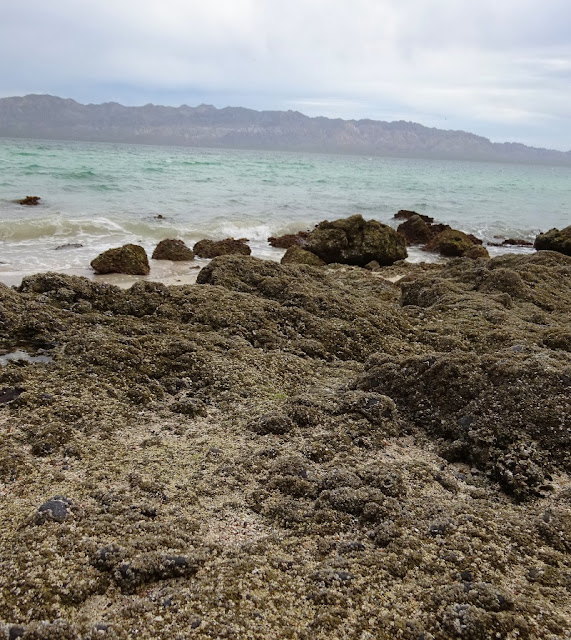 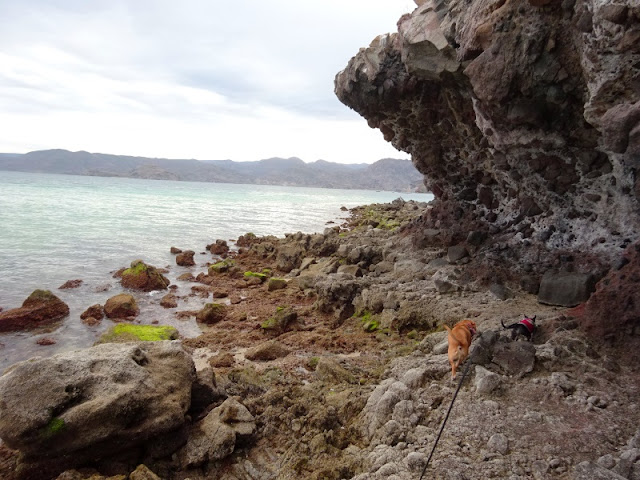 The dogs started getting cold and bored, so we started back towards our beach, but of course I was still looking for that perfect shell for my sage cleansings...which I did find at the end of our walk! This side of the Sea has a ton of shells, I'm glad I decided to wear my flops, otherwise I wouldn't have been able to do most of this walk. 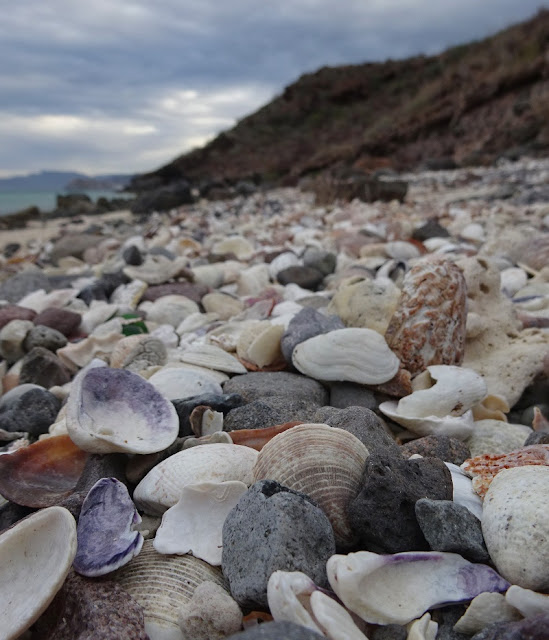 As I was walking back, John was just turning around from his walk with Ava, so we walked back to his place together and hung out for a little while. 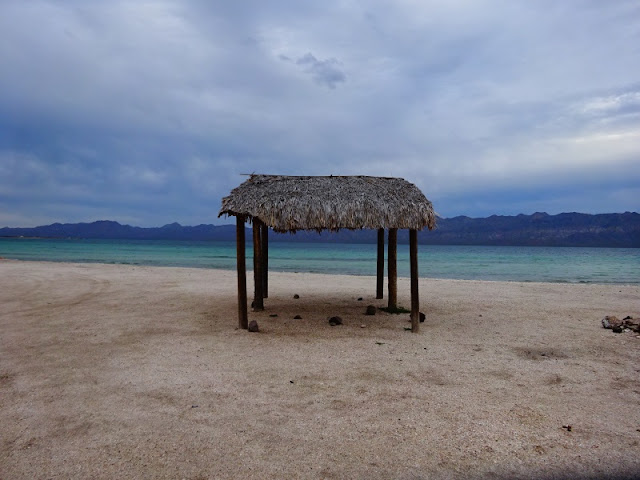 Jamie came home shortly after we got to John's so he changed his clothes and came over for a Sunset Brew. We talked about our days and enjoyed the most beautiful sunset we've seen since getting to Mexico. 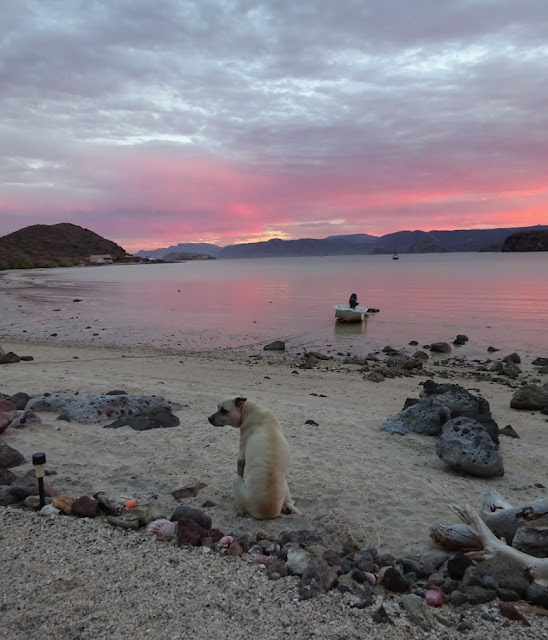 It was such a great day. I had a blast with John and Jamie was able to see some things a lot of people that visit here will never see. We have met some of the nicest people here at Playa Santispac, locals and visitors.
Now, with Mulege under our belts and itchy feet, we will move on tomorrow. We are going South toward La Paz to try to find some free camping maybe near a beach, on a beach or somewhere with good people and maybe some good food. It'll be interesting to see where we end up. 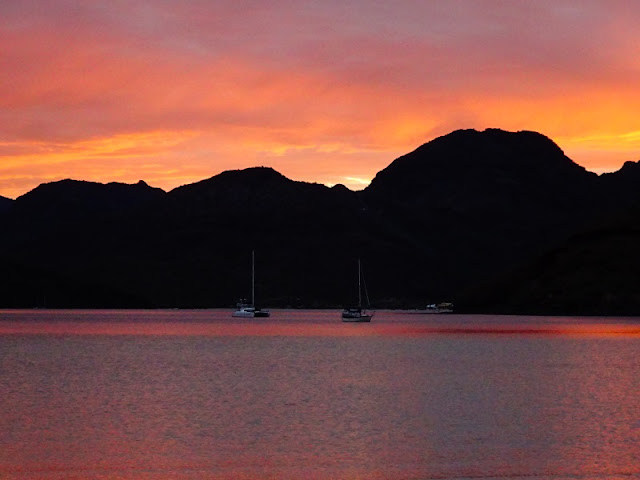 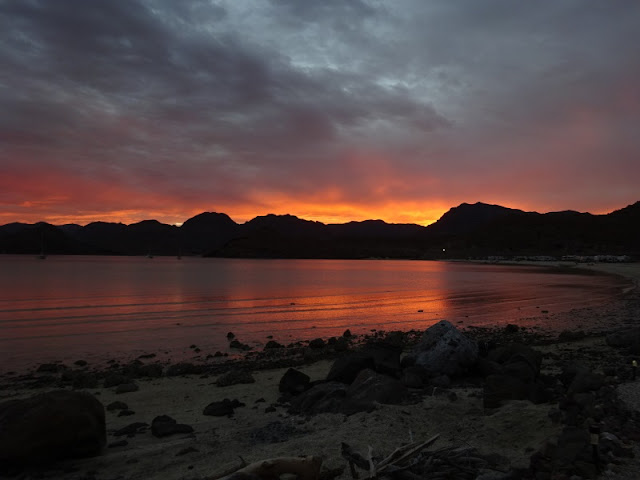 Click the video below to see footage of our time in Mulege!

Back in the States

Hello to all of you, my patient readers and friends!

We are back in the States. It feels good but weird and of course already missing the most amazing place of Baja, Mexico!

Little by little I will be pumping out posts of our trip.

Lots of stories.
Lots of pictures.
Hopefully more and more to come in the coming years.

Thank you for being so patient...you're going to have a lot of reading to do in the coming weeks!

Good to be back.