I received a request for information on our motorcycles, so here is the 411.
We bought the dirt bike, a 2003 Honda XR 400, from a friend of ours in the Bay area in 2013. The bike was a "loner" bike so when our friend would go riding, his friends could come with him if they didn't own a bike. 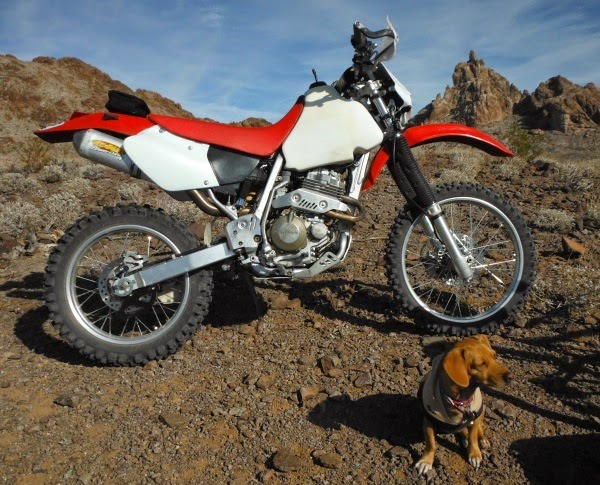 When the bike came into our possession, it did not have a street legal kit so Jamie put one on it. The street legal kit would make it legal to ride on main roads as well as the ORV/OHV areas. The state you live in, or where you register the bike, depends on what a street legal kit includes. The kit that Jamie put on the XR included; Hi-lo beam, rearview mirror, front and back turn signals, a tail light with a brake light, a horn, and a license plate light. Jamie also wanted a bigger gas tank, so we bought one off of Ebay for $29.00, it holds 4 gallons now instead of the standard 2.2 gallons. 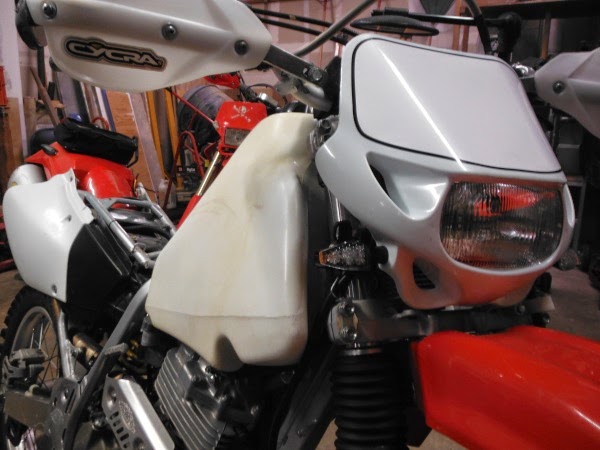 The bike had no passenger pegs for me to be able to ride so we ordered some pegs called rescue pegs. Instead of the pegs being attached to the back for the passenger, they attach right onto the driver pegs, as an extension. This riding position was pretty comfortable for me due to my long legs, but it didn't last very long. 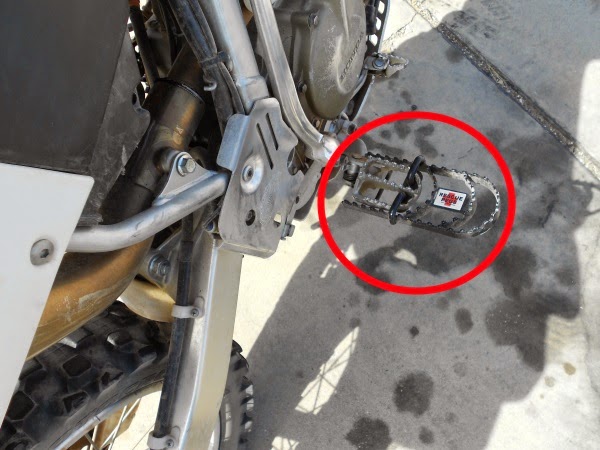 Last year while we were camped in Lake Havasu, we were pulled over at the light going to the laundromat. We knew we had nothing to worry about but this cop was dying to give us a ticket for something...anything! With every question he asked us, (which was about 10) we had answers and for everything he checked; the headlight, the horn, the turn signals, the license plate light, our licenses, our insurance, our plates...EVERYTHING came back clean and clear. The one thing he wouldn't let go of were those rescue pegs, so he got us with a "fix-it ticket", we would have to get the "right" pegs welded onto the bike within the next five days, then bring the bike back to the station to get it inspected and signed off or we would face a fine. 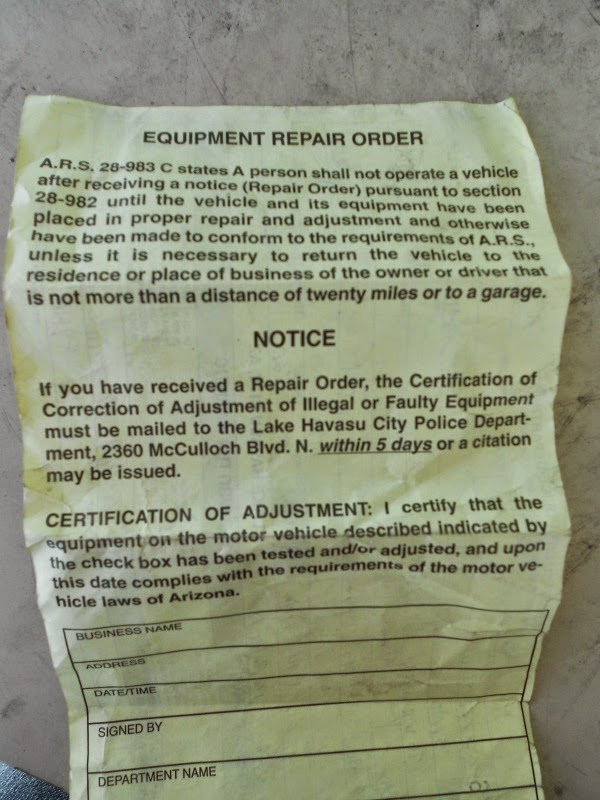 After we finished our laundry, we went to 2 different dirt bike shops to see if they had the pegs we needed...nope, they actually didn't have any parts for Honda's...weird! We drove back to camp, hopped online, ordered the pegs, which had to be next day delivery (which cost a fortune)! The next day we picked up our pegs at the post office and went to find the welder one of the shops told us about, we finally found the shop and had them weld on my new pegs...$50 for the weld!! I had just sold my guitar so it was kind of a push for the weld but, it still sucked! 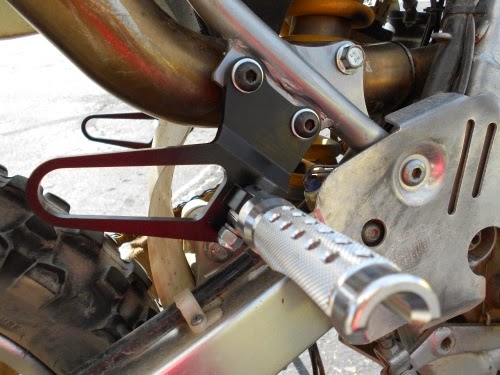 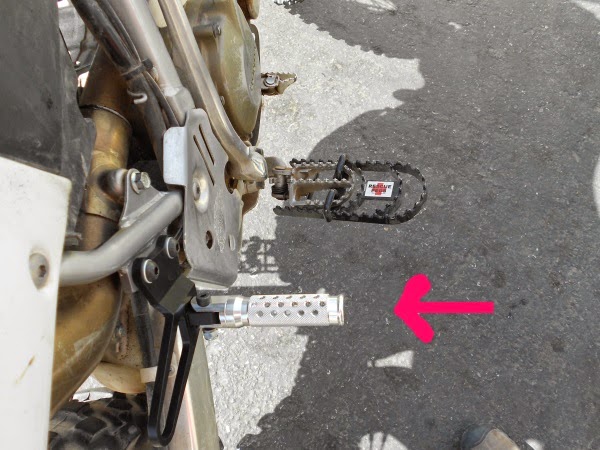 After the weld, we drove back to the police station to have them inspect the bike and pegs. We found it pretty comical when the same cop, that gave us the ticket, came out to inspect the bike! We had a good laugh and rolled out after we were signed off. The pegs are nice, they fold back toward the bike when not in use but they are pretty high up, so now I feel like my knees are by my ears when we ride! Are you picturing that image!? haha 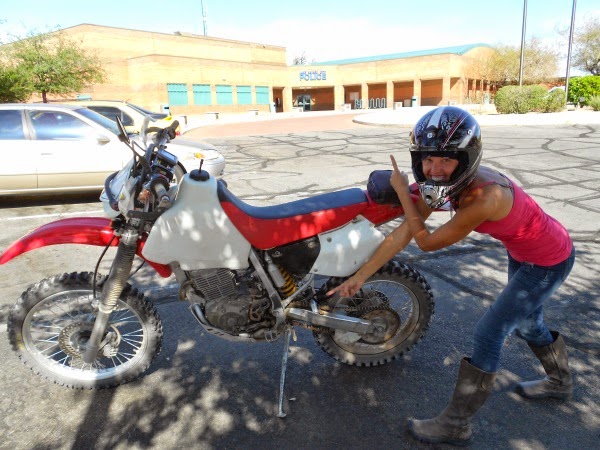 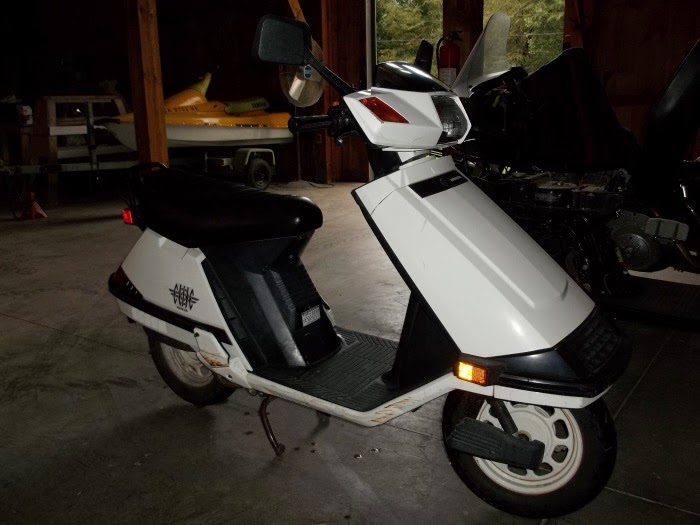 Since the Life Saver is an 80cc, it is considered a motorcycle so I had to get a motorcycle license to be able to ride it. I had never been on a bike as driver before, so I took a two day class with Safe Ride that cost $145, they went over basic safety and first time riding instruction, with a driving and written test at the end...and yes, I passed both of them with flying colors! 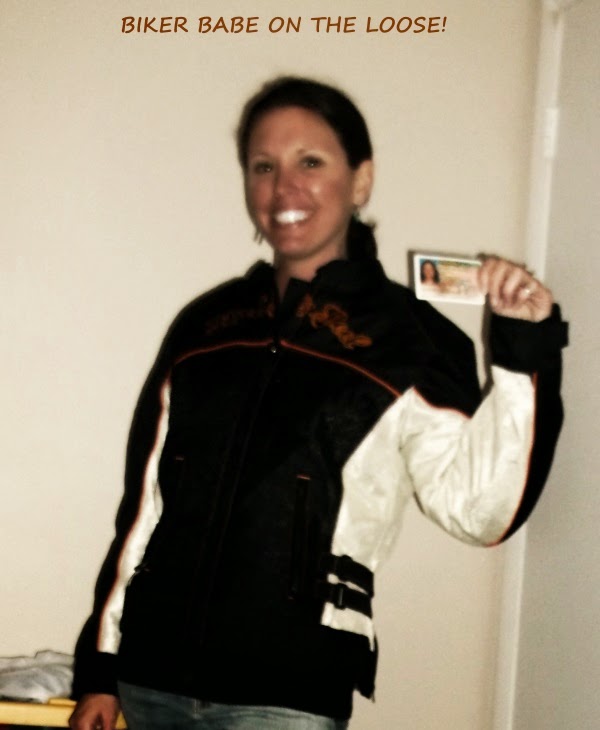 The top speed is about 45 mph with the both of us on it, with one person it may get up to 47-48 mph, if you're going downhill! It is able to go on most roads but cannot go on Interstates, which right now, is fine with me....I'm still getting used to 40 mph! Even though it's not really made for the dirt and gravel roads that we camp on, it's done a great job getting through the rough roads. Since the scooter has a low center of gravity we can fill a 7 gallon water jug and place it in the flat foot area to bring back to camp, without ever moving the van! It's also great for grocery shopping.
I really don't think there's much more to my Lil' scoot, other than we love our Lil' Life Saver!

Now, onto how we tow the bikes...
We have a motorcycle hitch that holds up to 600 lbs. connected to the van with a double hitch, so we can tow the bikes along with our trailer. 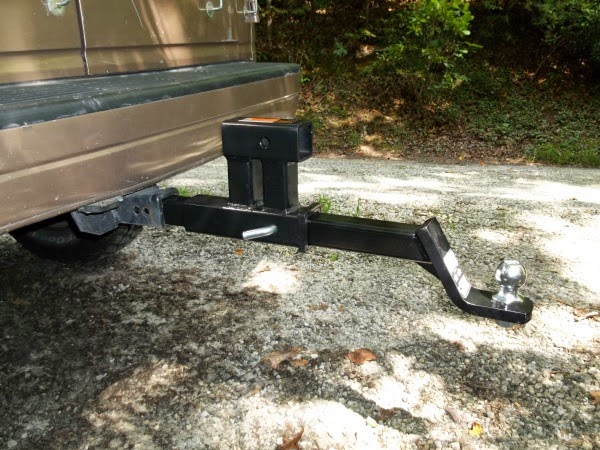 Jamie made the motorcycle hitch a little bigger/wider by attaching a piece of pressure treated plywood in the gap between the bumper of the van and the metal of the hitch. 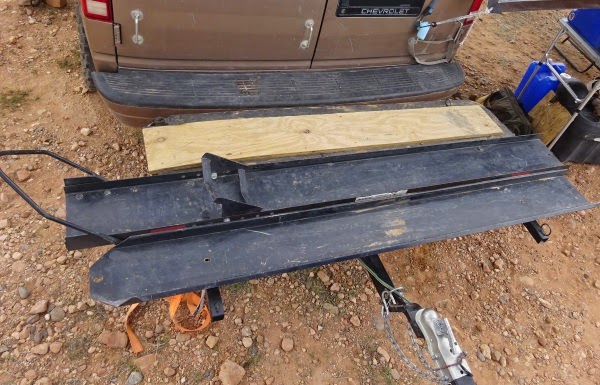 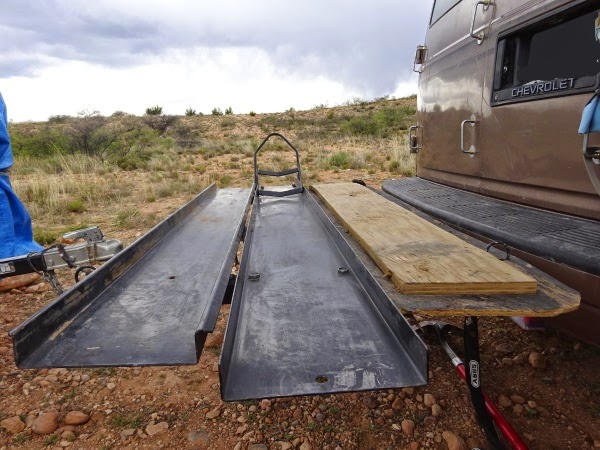 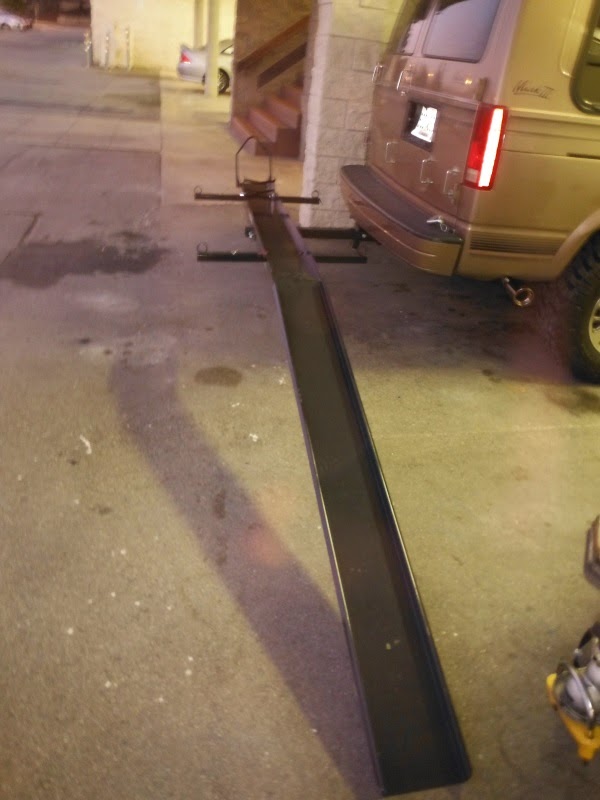 Once the dirt bike is on, it's all about muscle...well, for me. The scooter sits on the ramp part of the hitch when in tow, so we have to take the ramp and screw it back down to the hitch, then he will "wheelie" the scooter onto the back tire and place the front tire on the hitch, we change places and I take the handlebars, he goes to the back and as I roll it forward he picks up the back and it rolls up to the front where we can strap it down. Definitely a two person job! 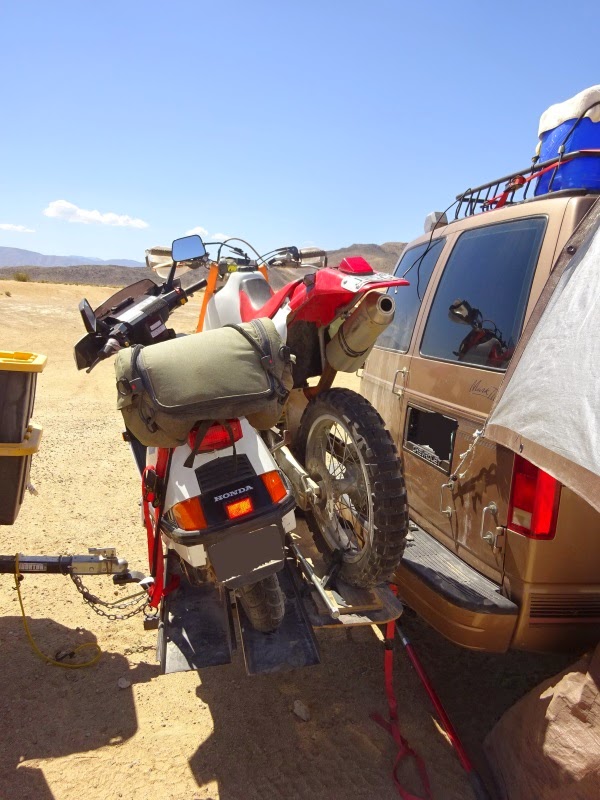 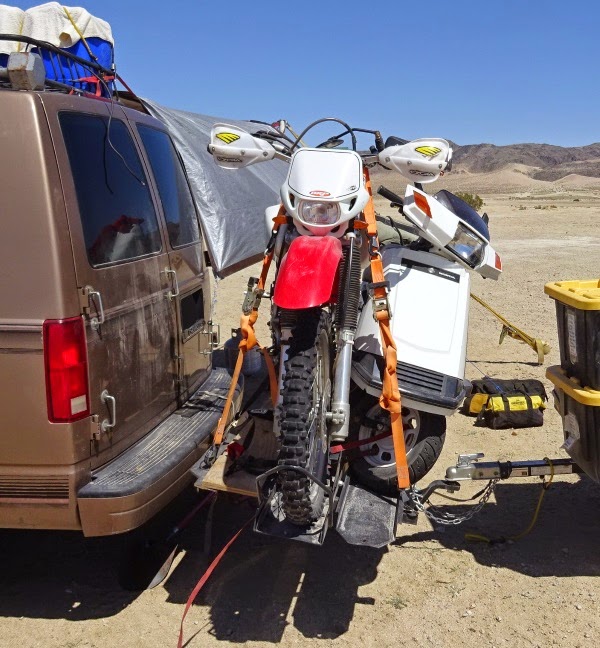 Over the past few months, we have noticed a bit of sagging so last month we took the hitch off of the van and reenforced it with a threaded steel rod. Now it sets perfectly straight and doesn't sag! 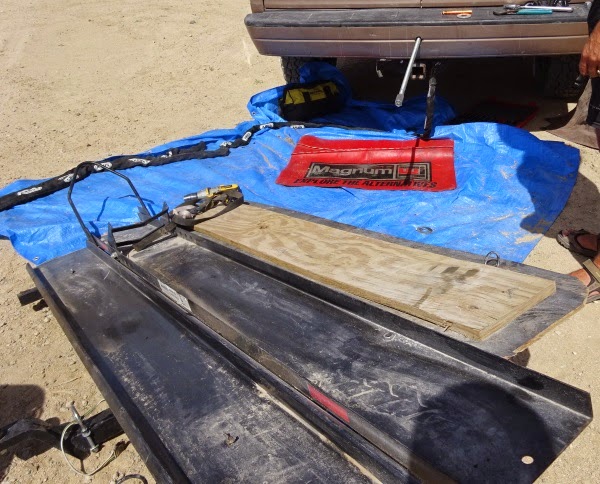 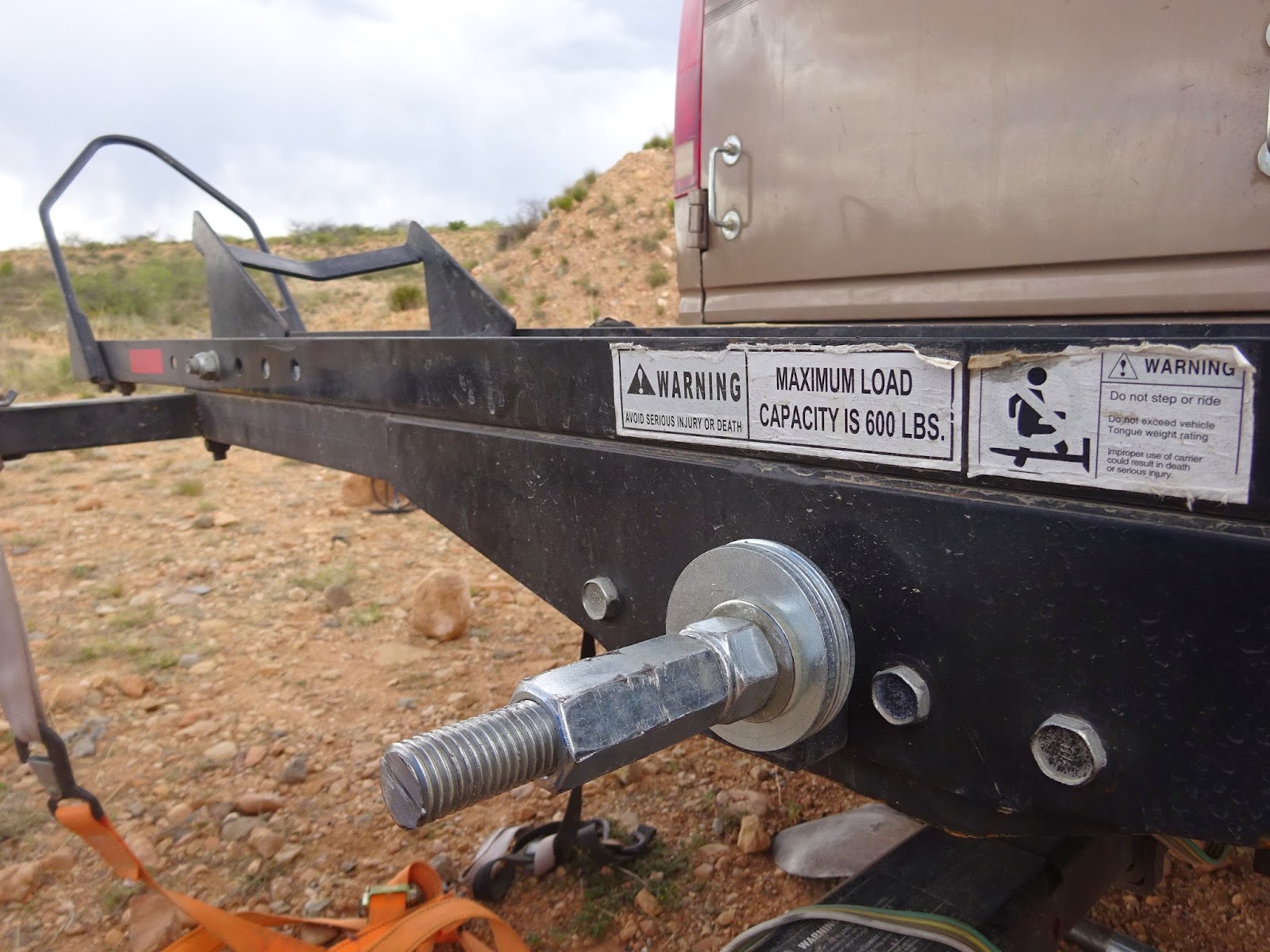 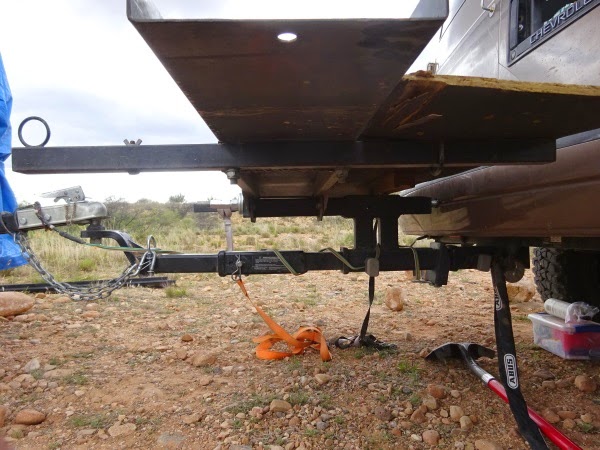 I hope that sheds a bit more light on how we tow the bikes along with our trailer. For those of you that don't know our van, we have a 1995 Chevy Astro van that is AWD, so that definitely helps. If you'd like to see more about our rig and what we've done to it over the past few years, you can go to the archives and there is a post called, We got a new van! posted on February 5, 2014, that describes everything in great detail.
If I missed anything you were wondering about, please comment below and let me know, I'll be happy to answer any questions you have.
Thank you for stopping by today, we hope to see you down the road!
Peaceful travels my friends. 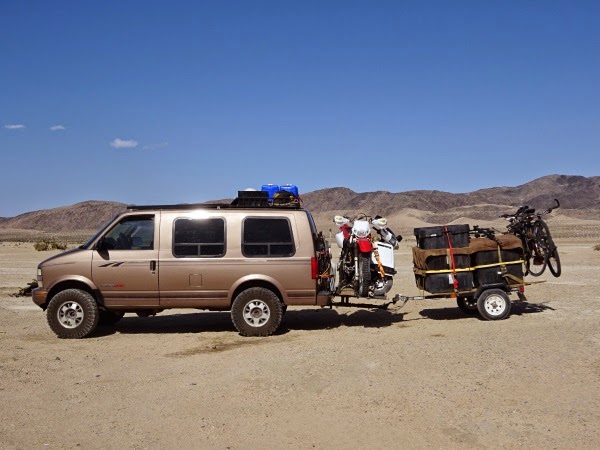 PEACE
Posted by Unknown at 7:32 PM