All the stuff of August

I have to laugh because if I don't I might cry!
I have been telling myself I will sit down and write an update on this blog and I don't. I think I will, then I won't.
Well, about 15 minutes ago, I decided to just sit down and write. It might not have been the greatest post but I would do it.
And I did.
Then...?
I went to write my send off and BAM! just like that it was all gone. WTH!? I saved it as I went and blah blah blah...and went back to the draft...gone....just gone.
So, here I sit again trying to conjure up enough mental energy to try it again.
Please bear with me.

We were able to stay in, or around, Zion for about 8-10 days before the heat totally got to us. We were able to get up to the iffy spot, that we had driven to one day but ended up turning around due to no emergency turn around spot and the road being a little too dicey for us. We found a "back entrance" into the same area, Smithsonian Butte Backcountry Byway, and were able to get to an amazing mountain top spot for about 2-3 days. 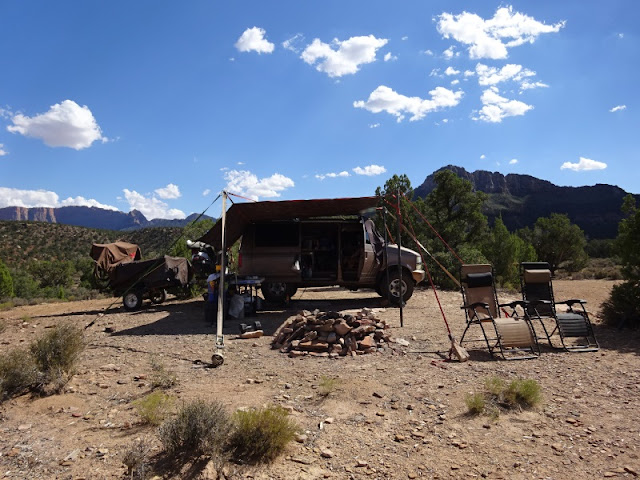 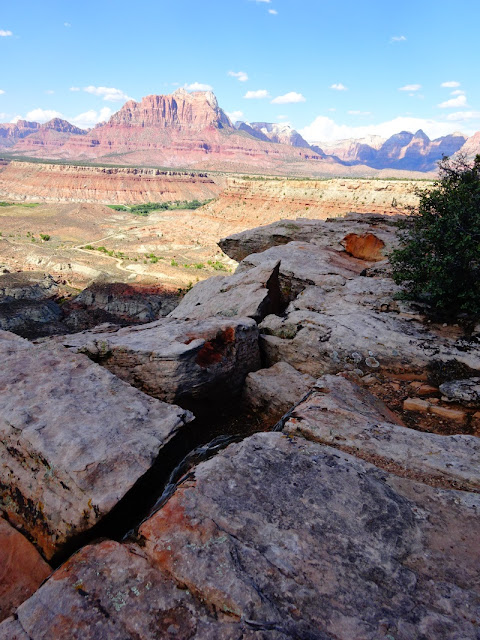 We loved the spot but the temperatures were getting pretty unbearable, ranging anywhere from 105-115 during the day and dropping to the mid to low 90's at night.
We finally made the call one day and decided to head back to Arizona where the weather was much more livable and the gas and food prices would become normal again.
We will have to see when Zion will become part of our journey again but for this year, it's out...too bad for us because it's just so beautiful. 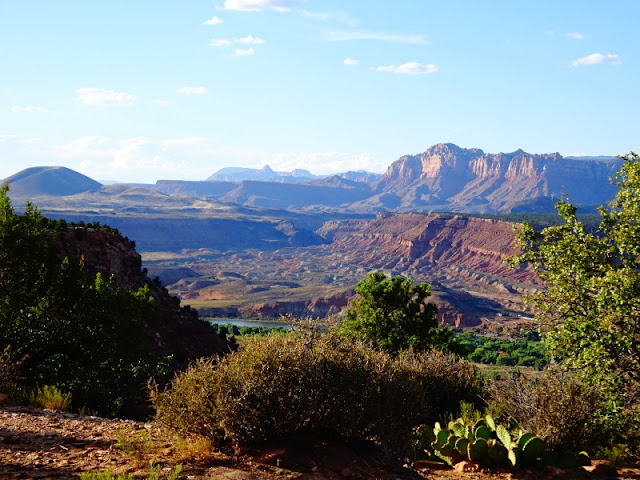 It was a long day drive back to Northern Arizona but it was a beautiful drive that we had never done before, plus we have A/C so that was a really nice treat for all four of us! 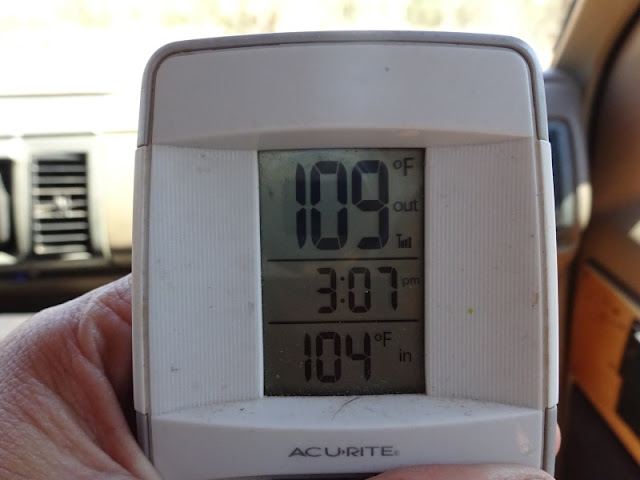 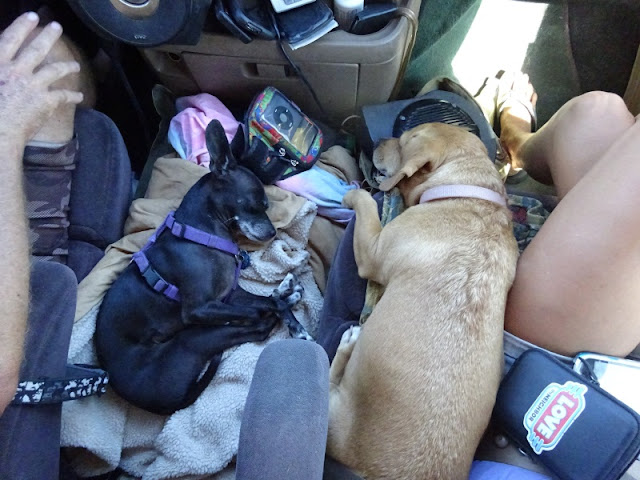 The drive took us around the North Rim of the Grand Canyon and while we didn't see the actual Grand Canyon we were able to see the surroundings and the one town of Marble Canyon and it was all very cool. 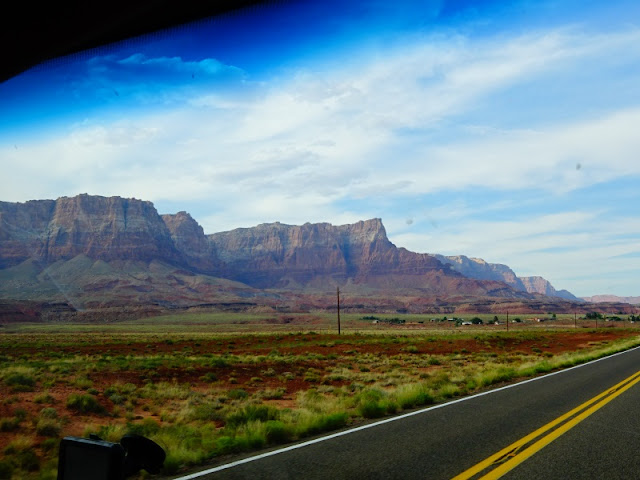 Very glad we have a reliable vehicle and (now) trailer, because there were hundreds of miles where we didn't see anything at all, even other cars!
I had noticed the sky seemed to be pretty hazy but wasn't sure if it was due to a sandstorm on the way (or way out) or if there was a fire close or far away. 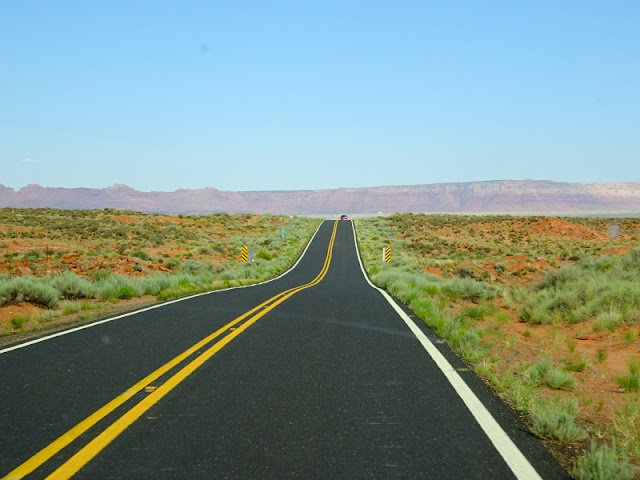 The haziness got thicker and thicker as we drove and by the time we were about 100 miles away from Flagstaff found out there was definitely a fire burning. We were hoping everyone was okay and that they weren't closing the Forests at this point. 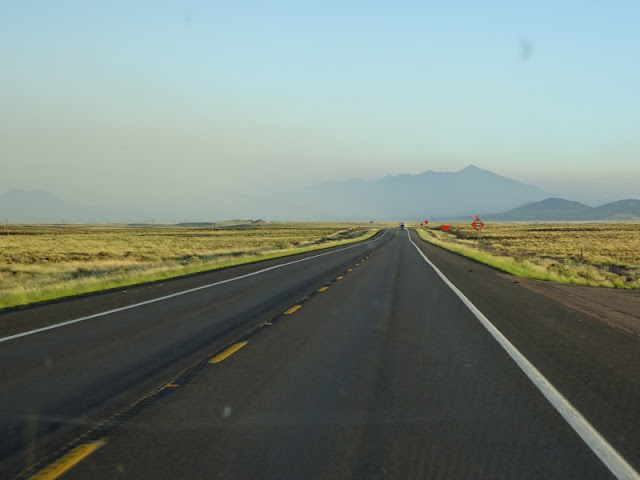 We drove until dark that night and were able to drive to a spot we had camped at three years ago up by Marshall Lake. It was good to be back in the state we love so much along with familiar landmarks and camp spots! 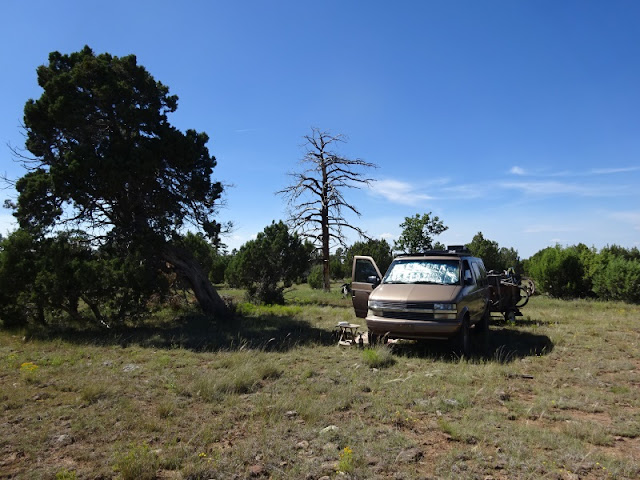 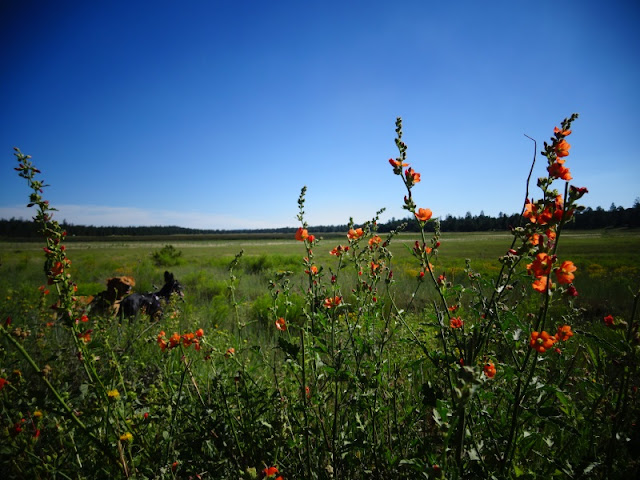 In the morning Jamie decided he was going to go scout out some spots to see if we could tuck up in a little better, but ended up coming back saying we already had a great spot. So we stayed for a couple of weeks.
Savannah even remembered the little mice that taunted her years ago in this tree! Smart lil doggie! 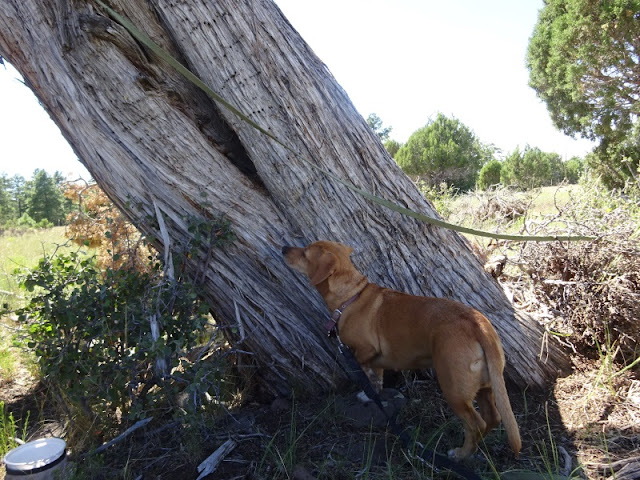 Forgetting that it was Monsoon season in Arizona, we had about 3-4 days of super heavy, crazy down pour rains that would literally knock your socks off if you've never been in a storm like that! The rain was so heavy the second night that we had to turn the TV up to volume 50 (the highest it goes) and a tree had fallen during the night that we didn't even hear, probably due to the rain hitting the van so hard.
We woke up to this: 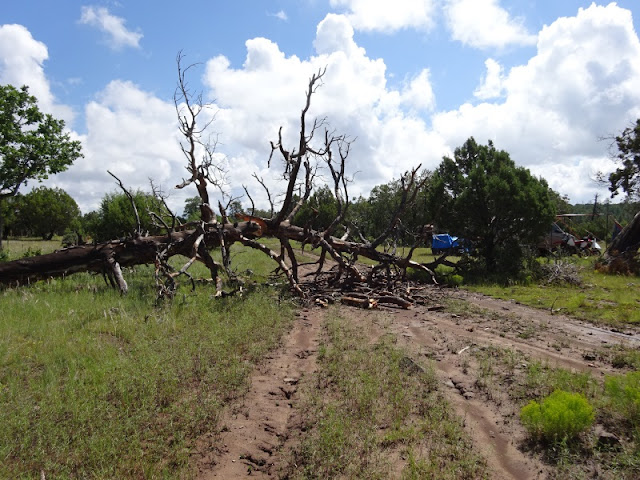 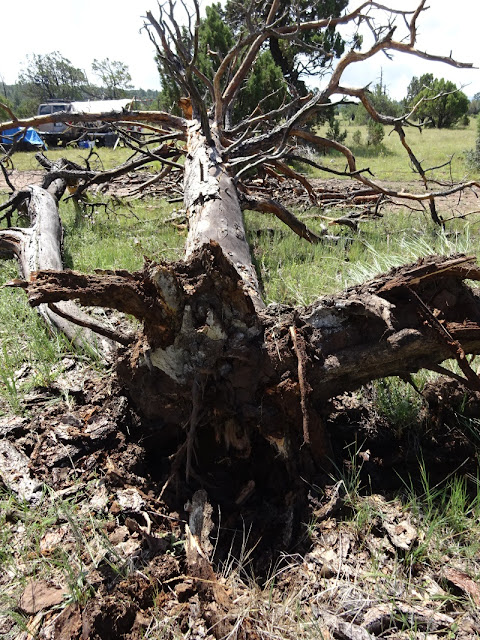 We had a conversation about this exact tree a day or two before, saying we were amazed that the tree was still standing...a day later, it was on the ground! Oops, guess we jinxed it!
Most of the time we were there, we spent a lot of time in the van because the ground turns into a big mud soup of mess. Take a look for yourself. 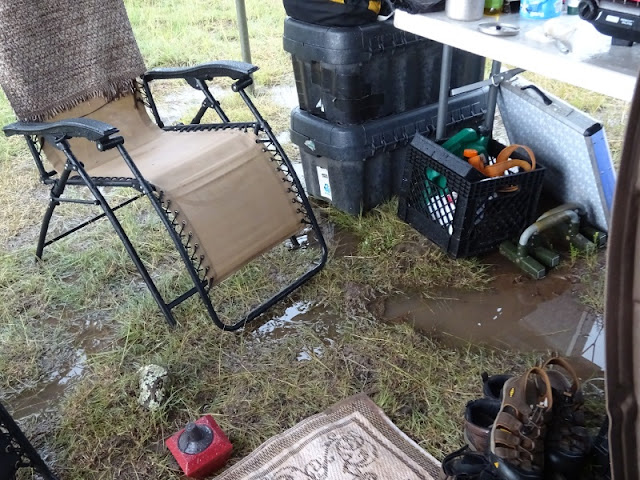 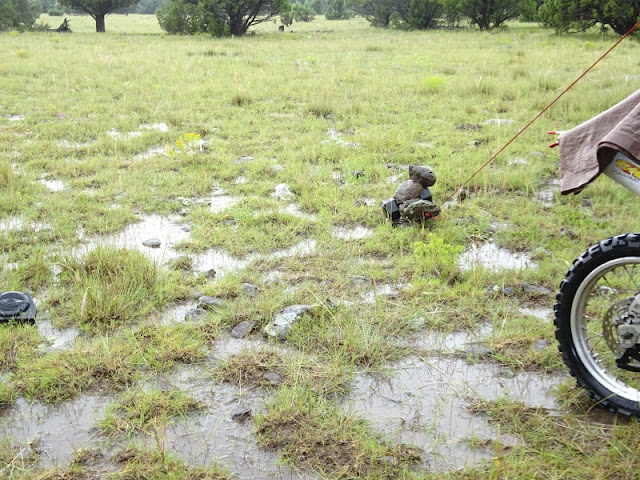 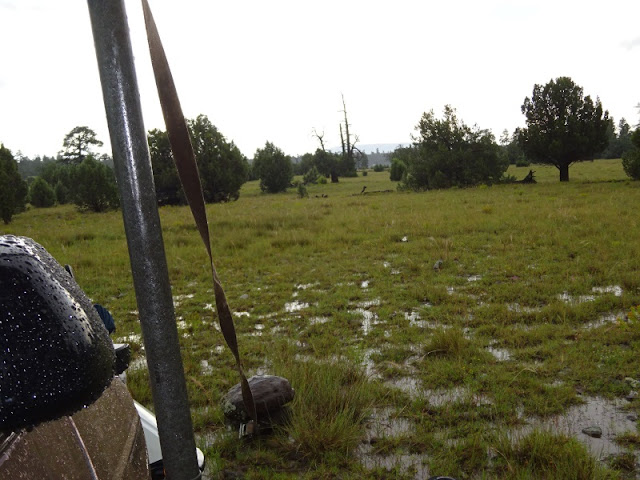 You can see the huge rocks piled on top of the rebar stakes due to the ground turning into mush, this was another morning... 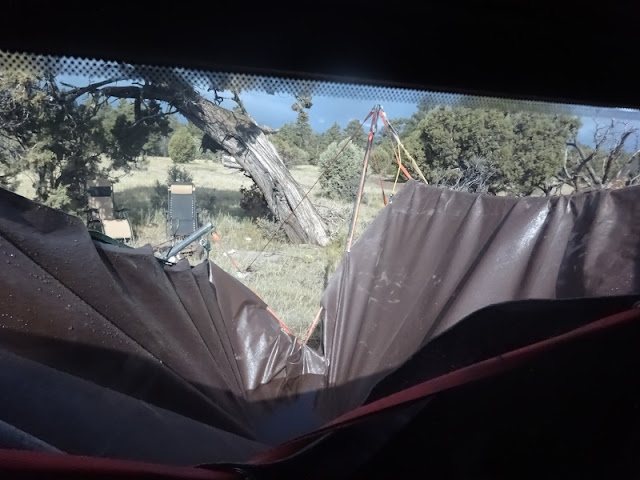 The stakes just pulled right up out of the ground...I guess if a tree fell we should have known better, but just weren't thinking of the strength of the Monsoons. So we fixed it with a few huge boulders and that was the end of the problems with the awning! 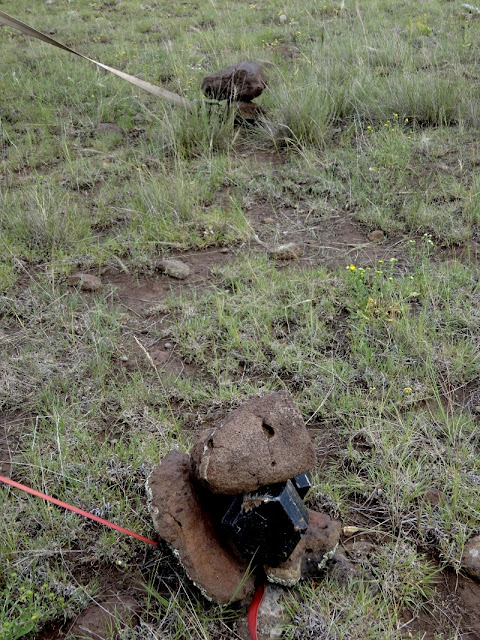 We did get a few things taken care of while there, between the rains and winds of course. I took the tint off of my passenger window due to it becoming blurry over the years. With this being the only window the dogs stick their heads out of, it got pretty bad over the years to where we couldn't even see out of the middle of the window...so it had to come off. It only took a couple of hours with some dish soap, water, a razor blade and some elbow grease. Now, it's clear as day and ready for some more tint! 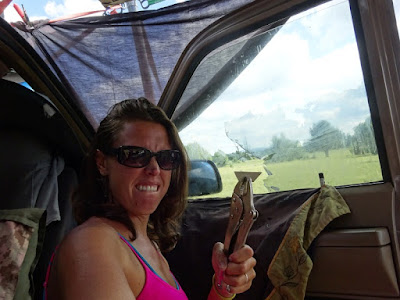 The night before we left, I went for a little ride on my scoot and ended up taking my first 'real' dive on it. Actually it was more like a wobble, dive, skid. It hurt and I got hurt but, now almost a month later, I'm almost healed. Luckily, I had on most of my gear sans gloves and even though I got hurt, it could have been a lot worse. I learned a couple of huge lessons in many things on that ride; 1-wear your gear, all of it and always 2- Slow down 3- Shade and pot holes look devilishly the same. My scoot got a little banged up as well but nothing I can't buff out.
This was my left thigh a few days later... 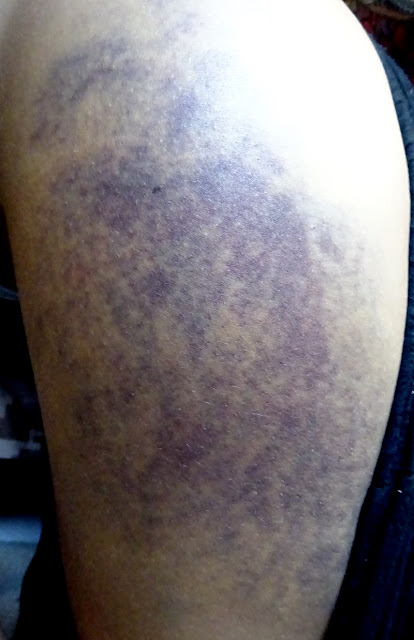 I'm almost healed 100% but my thigh hasn't caught up with the group of hurties yet and is still sore and I can't sleep on that side yet....but I'm getting there.
Needless to say, the next day packing up wasn't the most fun I've ever had, because my hands were pretty banged up due to no gloves, but we got it done and I'm just so glad all of that part of the pain is over.

I think that puts us pretty much where we are now, so I'm going to log off for the night before I lose this post too! 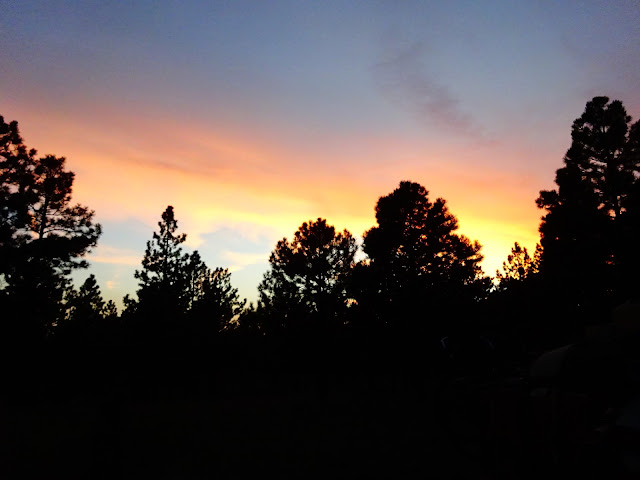 See you again soon.
Stay safe and safe travels.
'til next time....
PEACE