Day 11
Happy Valentine's Day to all you lovers out there!
We don't celebrate Valentine's day but we did go shopping so it kind of seemed like a celebration to us. We got a few things to make a nice big breakfast, so the morning of the 14th I cooked us up a great big fatty brekkie that was to die for! 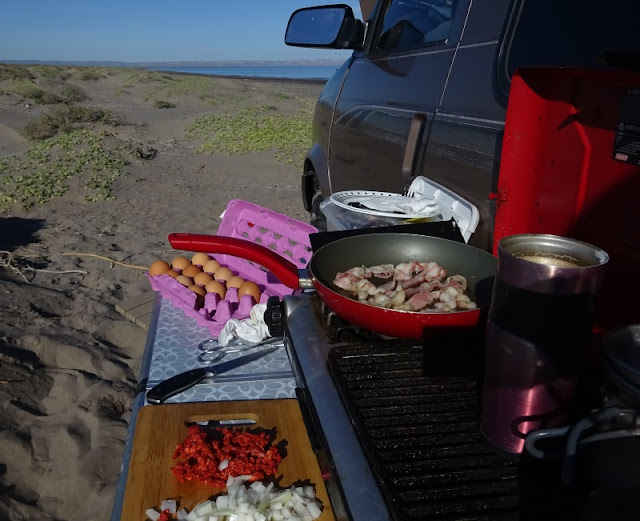 We had bacon (which was much thinner than what we're used to but very delish), farm fresh eggs, I chopped up a fresh white onion along with some amazingly fresh, thick Chorizo (yum) with half of an Avocado, mix that in with some Dirty Chai on the side (brought from the States) and you have yourself the "Breakfast of Fatties"!!! I don't think I did much for a couple of hours after that one! 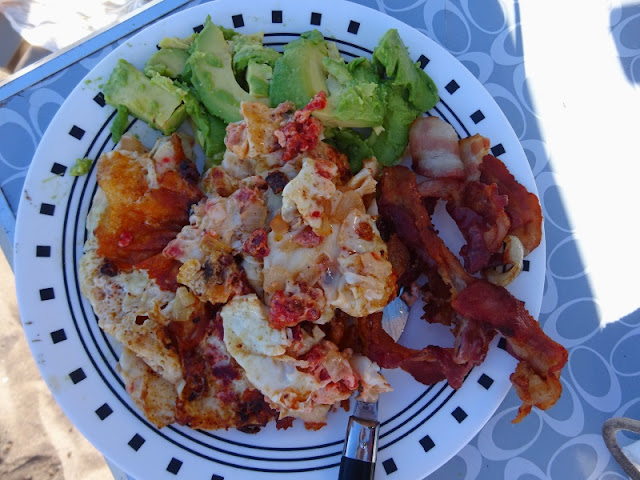 A little later on in the day, we decided to go for a swim. To catch you up on the things around camp, first though.... In the mornings right after sunrise, I am usually out reading while I make Chai or coffee. I see the same two guys walking the beach collecting trash that has washed ashore the night before. We started talking due to the trash collecting, because I have been doing the same thing during the days and it became a conversation piece when they saw a huge chunk of the beach didn't have trash on it anymore. I met them (Peter & friend, retired Canadians) and every morning we would meet-up around coffee time and talk about different things. Yesterday I asked Peter if he knew why all of the snorkeling boats come right to the water in front of the van, he said, "They come out here because this is where the Whale Sharks are." You could imagine my excitement as I heard this and now was even more totally stoked to get in the water to see one of these amazing beasts! They grow to about 40 feet long and feed off of Plankton, so they are totally safe to be around since we don't become part of their food chain. With this information, NEW goggles for both of us and a now digested belly, we decided to get in the water and go for a little underwater sight-seeing. 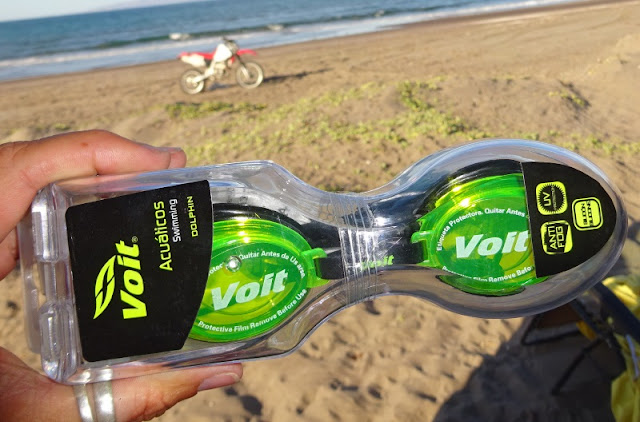 I put my wet suit on but Jamie doesn't have one so he went in with just his board shorts. The water was a little chilly at first, but once you get used to it it's not too bad, plus it was a pretty hot and sunny day so that always helps. 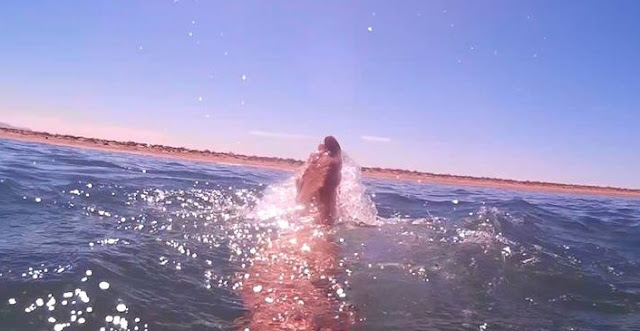 We stayed in the water for about 30 minutes but didn't see anything more than each other and a Blow Fish that I scared the crap out of when I swam over it. We had fun though and got some pretty good exercise in, so that's always a plus!


As we dried out, it was still pretty early in the day so Jamie decided it was time to switch the tire on the back of the dirt bike. He learned when he went for that ride with Al & Tom in Mulege, that before he rode it again he would need to change the tire to a more suitable tire for the terrain. The old tire was a Shinko Hybrid street tire that he changed to a Sedona, we brought the tire with us so we wouldn't have to try to find it in Mexico or have it shipped if we ended up needing it. 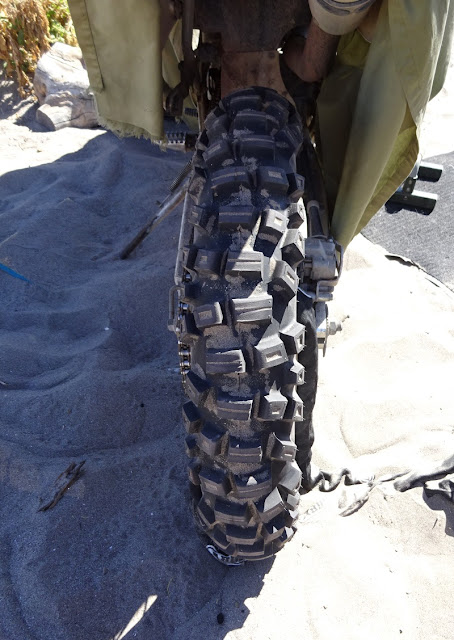 The rest of the day was pretty much laying out, relaxing and watching the boats cruise North and South as well as watching the birds scream at each other and dry out their wings. 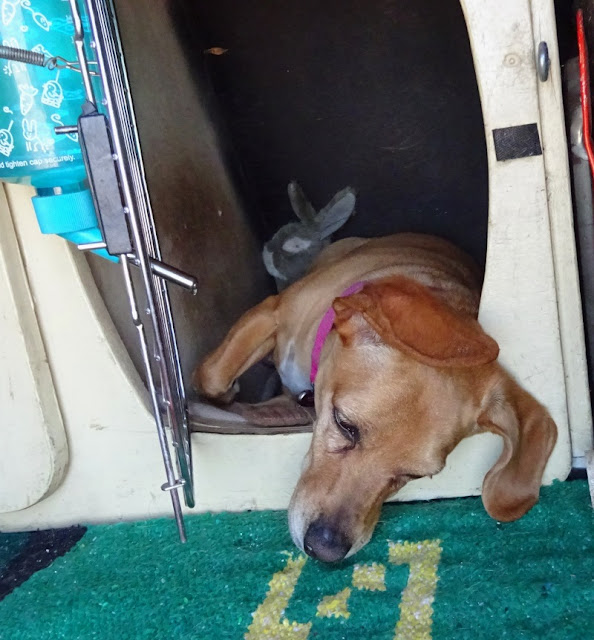 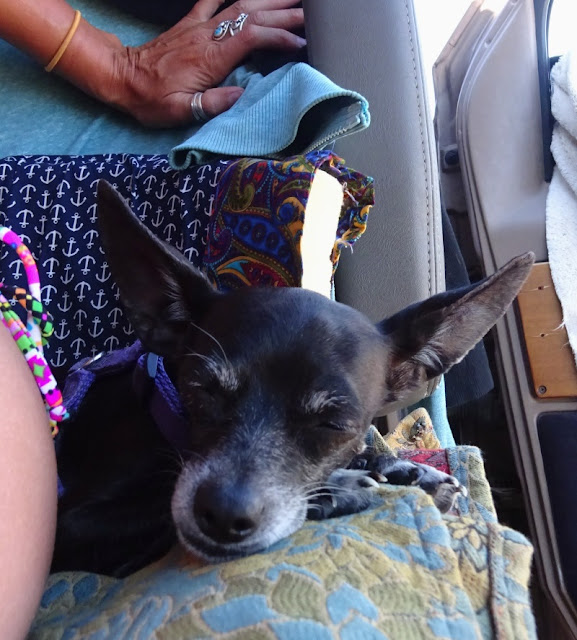 There are so many different kinds of birds around here and they are always yelling and screaming at each other, some dive bomb other birds in the air while some run after them on the shore...it's quite entertaining! 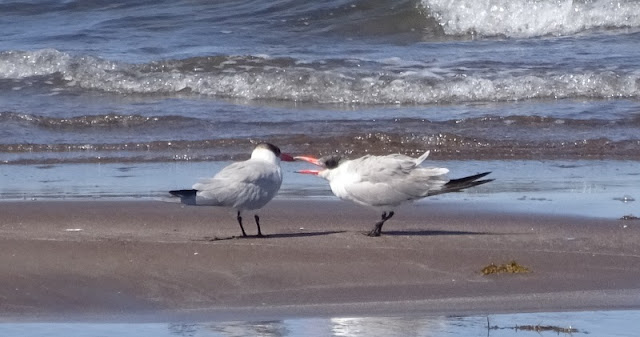 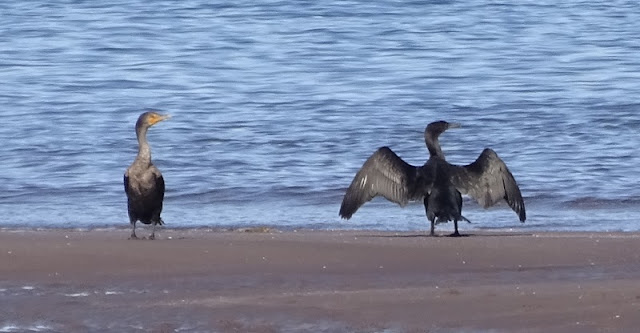 As the Sun started to set, Chili Moon and I went for our nightly Sunset stroll and I noticed the water is starting to get really choppy and rough, so there may be a storm coming through. 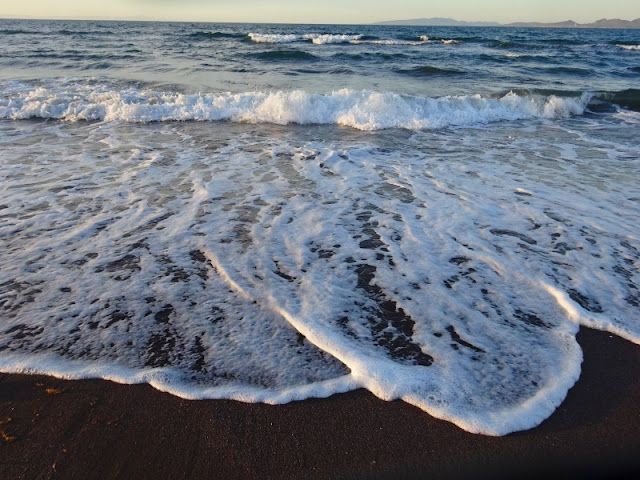 When I got back, I started making dinner and went to take a picture of the lights lighting up around La Paz...but my camera lens wouldn't come out. I tried 3, 4, 8, 12 times, I couldn't get it open at all, it wouldn't even turn on. I knew the battery was full so I started to panic and the evening was starting to turn very sad all of a sudden. I asked Jamie if he could try to get it to work and since he's "The Fonz" and all, of course he got it to work! I have always had problems with electricity and anything that has to do with power, whatever I can't get to work in a hundred tries, he or anyone else will try once and it works like nothing is wrong at all. Jamie says this is due to my 2 near death experiences so I'll just go with that, either way, we seem to always have success in the end....and now that my camera is working again that's what counts right now!

We are also on Instagram @EnigmaticNomadics
or online at https://www.instagram.com/enigmaticnomadics/
Posted by Unknown at 12:55 PM