We started our drive down Scenic Byway 12 around noon, not too bad of a start since we did some hikes and picture taking inside of Capitol Reef National Park that same morning.
I had 3 Rangers from different parks tell me that Scenic Byway 12 is The Most Beautiful Road in America, so we were both pretty excited about what we were about to see for the next few hours.
We started the drive in Torrey, the Eastern Gateway to Scenic Byway 12. Right there at the corner of Highways 12 and 24 is the carwash and Visitor's Information Center...a place we knew well over the past day and a half! At the Visitor's Information Center they had a booklet for Scenic Byway 12, so I made sure to grab it when I saw it, for this would be our guide down the beautiful road.
The drive started with forests of quaking Aspen trees, (we're not really sure if they were all quaking, some of them could have been Mormon or Amish) still very green...probably due to all of this rain we've been getting this Summer. There are also Firs, Pine and Spruce trees. Everything is green and lush and very different than what we've been seeing for the past month or so. Our first stop would be Larb Hollow Overlook, at about 9,800 feet in elevation. I believe, at this point in the trip, this is the highest Joon has ever been and she did really well!! We stopped and made lunch at the overlook, having a little van picnic. It was windy and pretty chilly up there but sooo beautiful, you can see, what seems like, forever!
{Larb Hollow Overlook is another "must stop" along Scenic Byway 12, on the Eastern flank of Boulder Mountain. Travelers are rewarded with spectacular views of the sparkling blue waters of Bown's Reservoir, the stunning deep magenta wedge of the Waterpocket Fold, the towering Henry Mountains and the vast landscapes beyond- a region so remote it was the last to be surveyed and mapped in the United States.}

The booklet reads that there are numerous amounts of wildlife in the area including deer, elk, black bears, and mountain lions as well as smaller species and tons of birds, but we mostly only saw birds playing and trees! 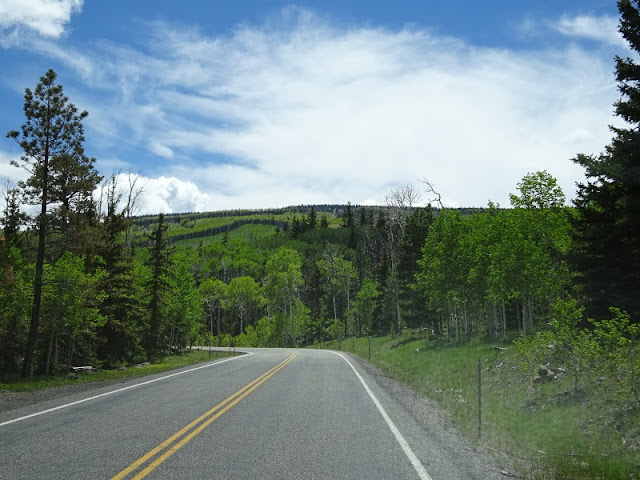 Since we're never really in a hurry to get anywhere, we thought as we drove we would look for BLM and maybe stay out here in this truly wild area for a week or two. We looked and looked for forest roads as we drove the mountain but our conclusion was either, the good spots were taken and/or the other spots were waaaaay too close to the road for us. I'm not saying it couldn't have been done but we don't like to camp close to a main road for many reasons, the main two being; my dogs safety and our privacy. So we drove on. 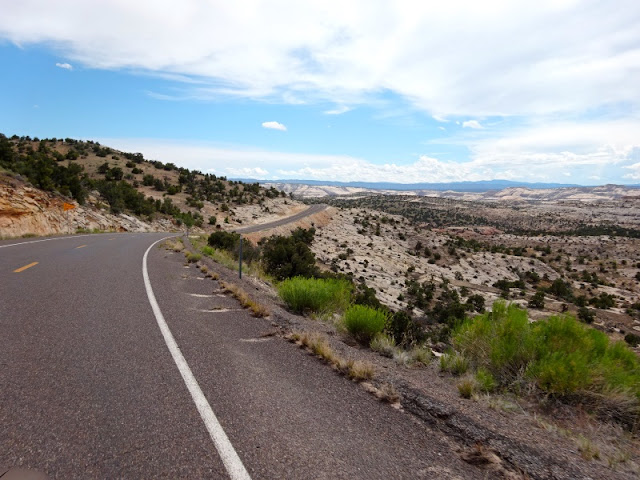 We thought maybe driving down one of the Scenic Backways off of 12 would be a better route for us to take to find camping, so when we arrived at the turn-off for Burr Trail, we turned down it and started looking for a spot. When we turned off we saw about 20 people standing next to 5 different vans that were decorated in shoe polish, everyone dressed in running gear. At the time we had no idea what was going on but later found out the race, Top of Zion, http://topofzion.com/ was being held that day and the next, a crazy two day relay race! Those people have more guts & stamina than I do, that's for sure! We would see the relays of runners and "chase-vans" for the remainder of the day into night.
Back to the Trail...Burr Trail is an awesome road, it's a 30 mile road; some paved, mostly graded gravel and seems to be taken care of for being a "wild road". It can be accessible by passenger cars but can be impassable when wet, everything gets really slippery around here when it rains. As we drove down a few miles, we saw some great spots, almost as soon as you turn down the trail, a couple were already taken (the best ones of course). We drove maybe 6 miles until we decided to turn back due to no internet and didn't want to waste the gas. *At this time we didn't really have an idea of how remote this road actually is. We thought for sure there had to be a wifi tower or something...anything, but no. There was nothing. We would be looking the entire trip on Scenic Byway 12....never got a wifi signal, never got a phone signal, so be prepared for this if you are going to travel this road. We had no clue and luckily didn't need any services!*

I do regret not stopping at the Anasazi State Park Museum. {The Museum is located on the site of an Ancestral Puebloan habitation that archaeologists believe was occupied between 1050 - 1175 A.D. There is a partially excavated and reconstructed village consisting of almost 100 rooms. They also have artifacts and a theater on-site.} It would have been really cool to see but I think at this time we weren't sure where we were going to sleep for the night and wanted to get there before dark, so we kept driving. Maybe another time.
After coming off of Burr Trail, the road gets really interesting and a bit scary at one point. The "scary" part of the road, especially if you aren't ready for it, is The Hogsback. The Hogsback is between Calf Creek Recreation Area and Boulder Town. I'm going to quote the booklet because they describe it so well. {As the asphalt clings to this thin razorback ridge of slickrock, the terrain spills steeply off to each side toward winding creeks and canyons below, where cottonwoods provide ribbons of green, gold or gray depending on the season. Driving here is slow and cautious, but the vistas are incredible.} And it really is a thin razorback ridge of slickrock! We weren't ready for it. I actually thought it was a road like Burr Trail, that you turn off to drive. I had no clue we were about to drive this, all of a sudden we're there with a huge class A going the oppostie direction at the same time! I'd like to have known what was going through that Class A drivers mind! The picture (below) isn't great but it kind of shows you what it's like! Craziest thing we've done yet, this Summer! haha 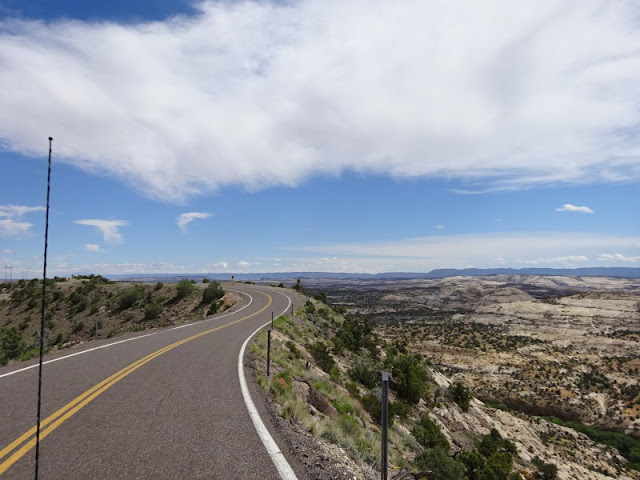 We pulled over at the next turn out to take in our surroundings and kind of catch our breath from The Hogsback. I believe this area is considered, part of or the beginning of, The Grand Staircase-Escalante National Monument (which a ranger told me would take about 12 years to see the whole monument, so it's pretty big)!

We drove past some trail-heads and Calf Creek Recreation Area (another stop I would have liked to make if we could have camped there). The Rec Area has a 13-site campground...that was full, a day-use picnic area and trail-head. The reason I wanted to go there was due to the amazing 126 ft. waterfall I keep seeing in all the magazines, but it's a 6 mile (round trip) strenuous hike and once again the campground was full and we didn't know where we would be sleeping, so we drove. Over the next couple of hours our scenery would change dramatically from barren, gray rocks barely sprinkled with any type of green to lush fields, blue blue skies and huge beautiful mountains. I felt like we were in Montana or maybe Idaho, although I've never been to either place, that's what it looks like in my mind. 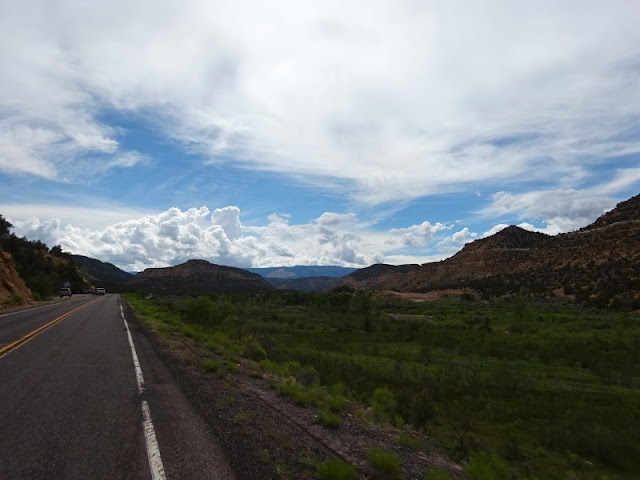 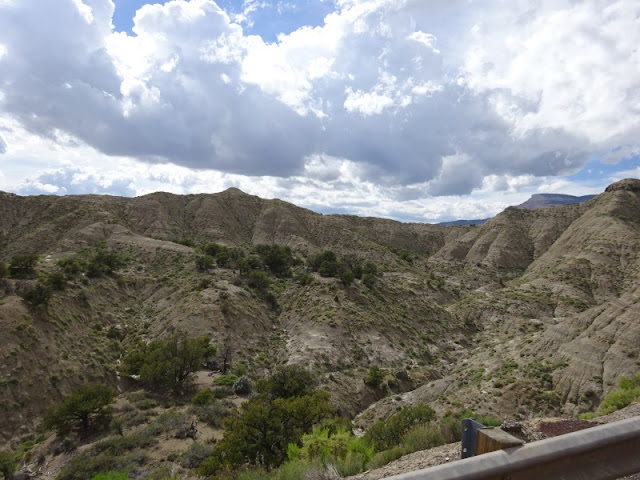 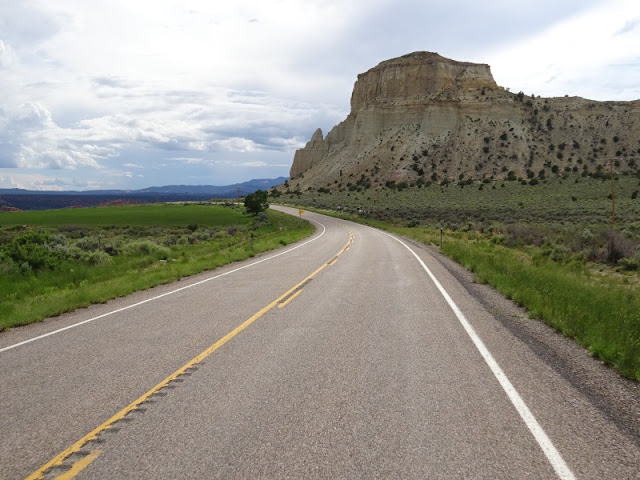 Just as we would get used to one 'form' of scenery, it would drastically change to something completely different. It was almost like we were flipping pages in a book, it was that radical. 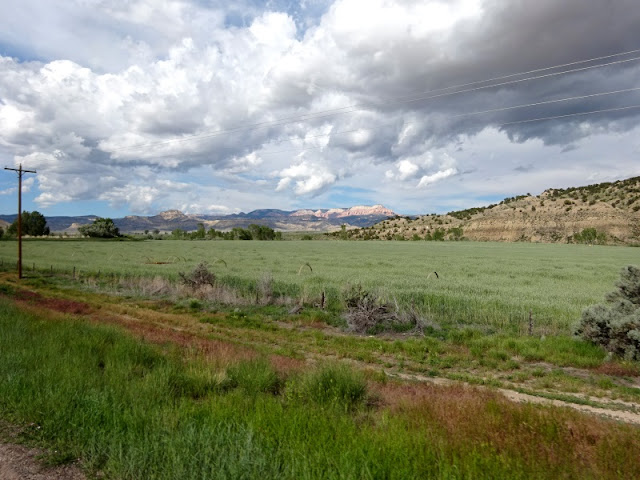 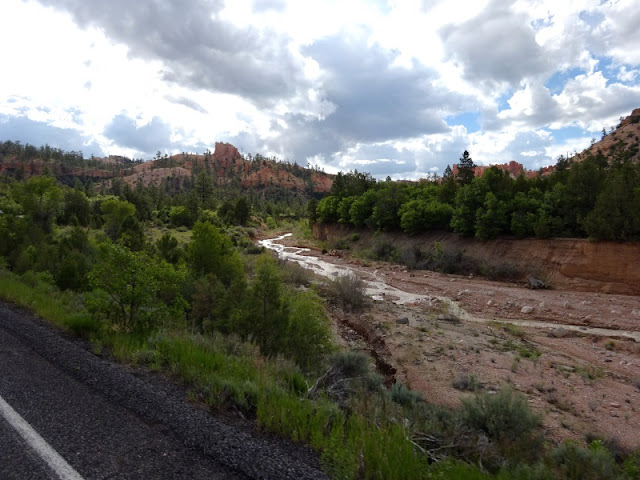 Right at "the end" of our trip on 12 we turned a corner and saw our first glance of Hoodoo's, the rock formations Bryce Canyon is known for...that was really something else and truly amazing when you're not prepared for it, (even if you are prepared for it, it's still pretty amazing)! 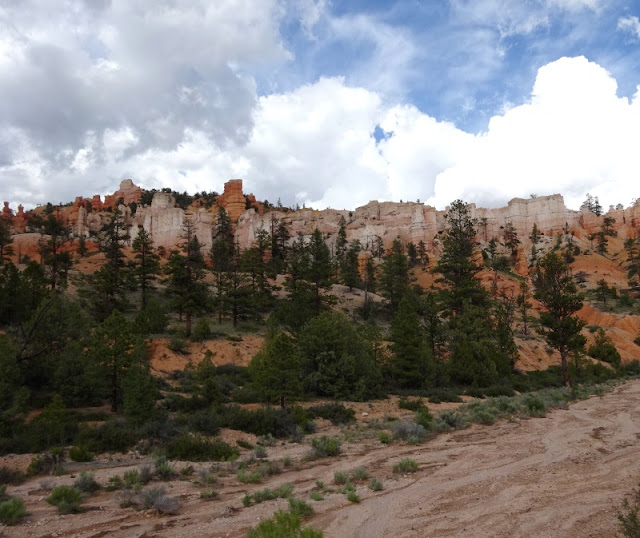 Scenic Byway 12 really is a beautiful road to travel. I am happy that we were able to see "The Most Beautiful Road in America", and all of the major differences, all in the matter of 7 hours. We found a great place to camp not terribly far from the park and are surrounded by Deer and Pronghorn, or what people call American Antelope (even though they are not part of the Antelope family). 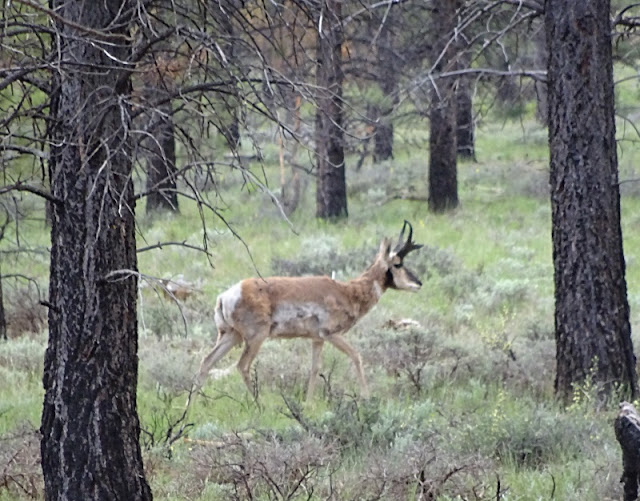 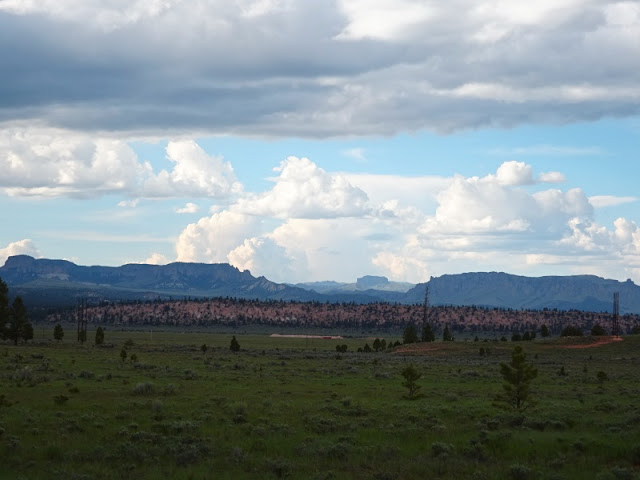