Going in circles one day at a time

The day after the trailer fiasco, we woke up to a beautiful spot on a creek. We were parked under these beautiful tall trees that were providing some much needed shade, for the temps were already in the low 90's at 9 a.m. Today our plan would be to scout for a "better" camp spot. 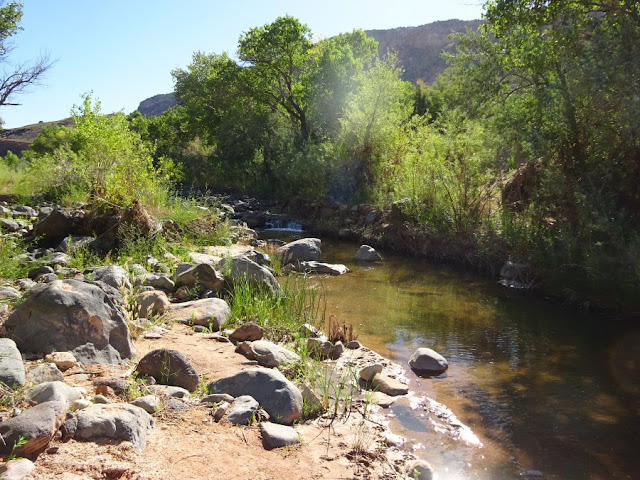 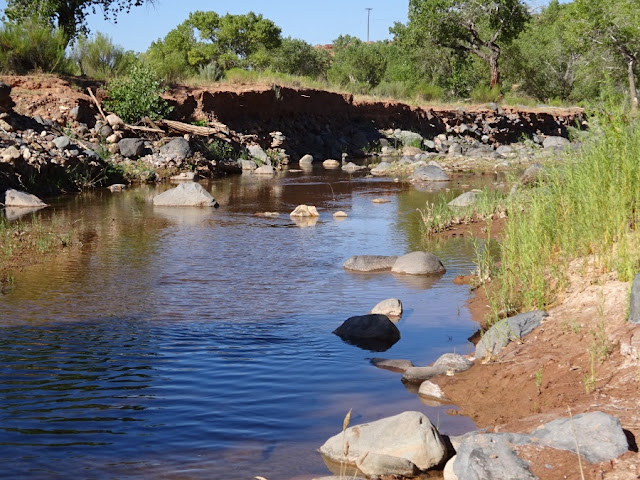 The place we were was a great place but we weren't getting any cell or internet signal, it's a tad bit too shady to get any sun on the panels and there were sooo many fire ants the ground looked like it was moving. I had already been stung 3 times in the matter of 15 minutes and I had to move the dogs and the cooker 4 different times. 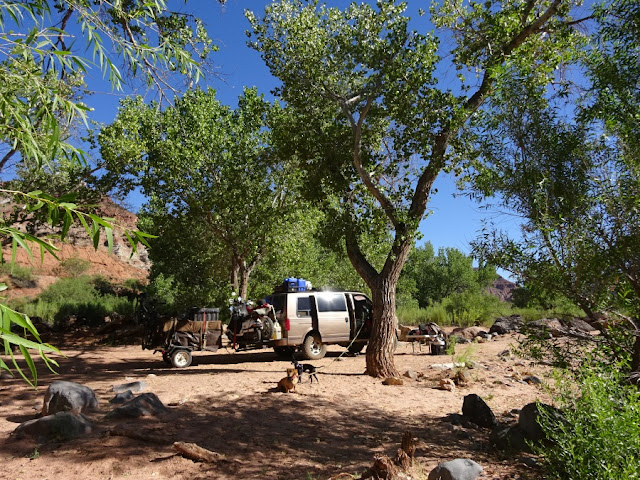 We figured since we had so much to fix right now that we would find a place close to town and sit tight there while we fixed everything, then go into Zion after that. Before we left Bryce Canyon, we found two other camp spots, other than the creek spot, on www.Freecampsites.net so we thought we would go check those places out and go from there. As I cooked brekkie, Jamie was trying to get some pages to load on the computer, one of which was our bank information, but since we weren't getting a signal he couldn't access the page. We thought we definitely had enough to cover a couple of $5 purchases here and there, so we wrapped it up and went into town to grab some more hardware, etc. We got everything we thought we needed and drove to the camp spot at Leeds Canyon, about 20 miles from the creek. Leeds Canyon is a BLM area that allows you to camp for 16 days, it's very hilly & mountainous with not a lot of shade. 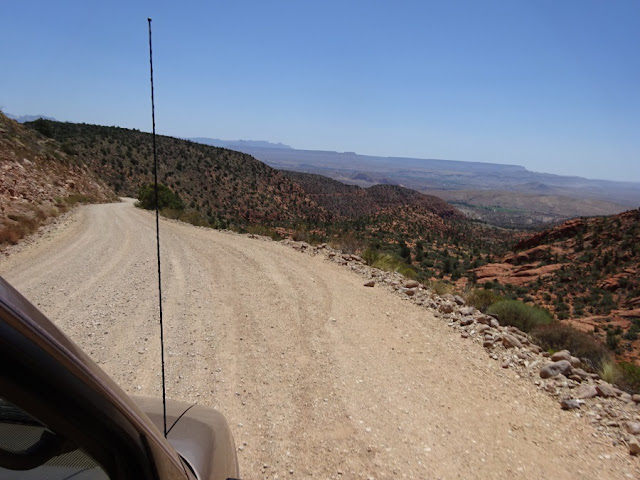 Even though we were in the mountains, at times on top of the mountains, the temperatures did not drop. I think we only went up in elevation, not even 1,000 feet, there was a lot of wind but just as hot...temperatures still reaching 105+. We drove around for about 15 minutes not really getting what we came up for (cooler temps), so we turned around and decided to stop real quick to let the dogs out. 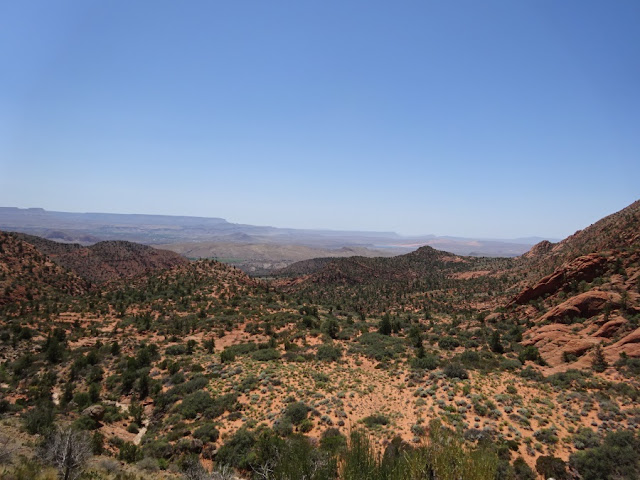 While we were parked Jamie thought he would look at the internet signal and try to load our bank information again. It was at this point we WERE able to load pages, only to find out we were in the red...-$10.96. Dang it!
We called the bank and talked to a customer service rep to figure out how to fix this and all in all the gal was not very helpful; telling us we would have to put some money in the account by close of business that day or we would be facing some major charges. This bank charges $37 per item that is overdrawn, at this time we had 10 transactions that were pending; $5.34 here, $2.87 there. Pretty much if we couldn't cover the $10.96 by the end of business hours, we would be facing about $370 bucks in overdraft fees....totally crazy huh!? Luckily we have very good friends that still live in Denver and my girlfriend was able to go into a facility and deposit some dinero into the account...phew. That whole mess took about 3 1/2 hours to solve and was very stressful. Thank God for good friends! We'll never make that mistake again...always check before buying.
Now that that was handled, we still had to find a camp. We drove to the spot in Rockville, fairly close to Zion and to the town of Springdale, that has pretty much everything you want or need. This area of camping is a little different due to the rules; you have to camp at least 1/2 mile off of the byway and the main road or you will concur a $150 ticket, which people on www.freecampsites.net have commented that they stayed there, not a 1/2 mile off the road and got tickets for not adhering to the rules. The thing is, we didn't see any spots that weren't right on the road and we didn't see any other roads or trails for a vehicle to make it that far off the road, so I think it might be mostly for tent campers or backpackers. We drove down the rough bumpy, rugged road a couple of miles then saw the road ahead, it was pretty steep and narrow with no turn around spots in case of an emergency so we decided to turn around while we had the chance...maybe there were some good spots up there, but we weren't about to get stuck to find out. I'm not sure why I didn't take any pics of this road, probably because I had had enough that day and the pictures online don't show the road I'm talking about...sorry.

Back to the creek we went...going in circles one day at a time!
On our way to the creek spot we saw some public dumpsters, so we stopped to finally get rid of the trash we kept forgetting to dump. When I was throwing the trash away, I saw a metal bed frame sitting outside of one of the dumpsters, after looking at it we decided to grab it and use it for the trailer. If it didn't work we would bring it back and if it does work, we're not out any more money! I also found 2 brand new bicycle tires that had never been used so we grabbed those as well...it was almost like something told us to stop there to save time and money...recycling at it's best! Waste not, want not.
We arrived back at the creek around 6:30 p.m.. There were some people parked at the spot we had this morning, which was fine because we didn't want to park there again anyway, due to the ants and too much shade. Fortunately we can drive further back than most people because we have our AWD Joon! We drove back a little ways where we have a sandy beach area that leads right down to the creek. 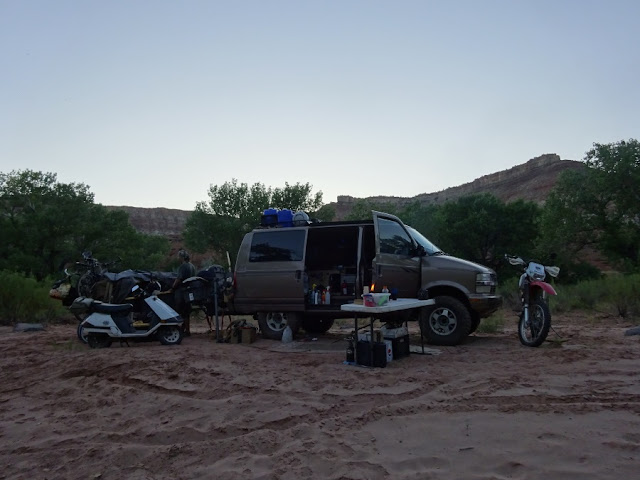 We have a couple of trees around us but not tall enough to cast early morning or late afternoon shadows on the solar panels and they also act as a small "privacy curtain" from other campers. It's a nice little place but it's still pretty darn hot. 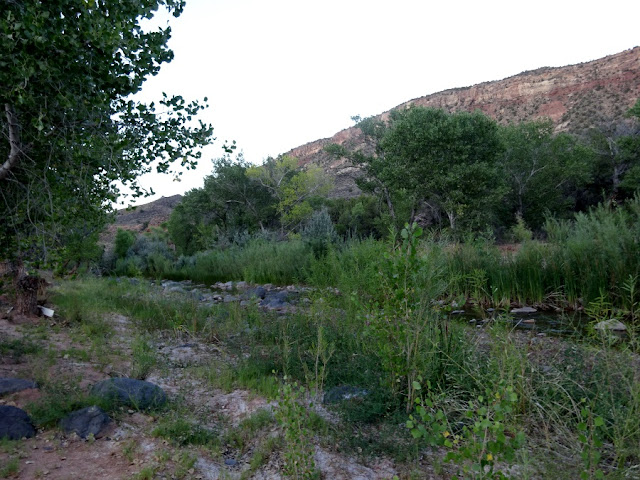 We were so over another day of stress, stress, heat, stress that we just unpacked and hung out. Jamie gorilla taped my heavy duty bin that broke and pretty much piddled the rest of the day, as well as getting the van in sit mode. We left the awning for the next day...we weren't thinking about the early morning hot temperatures! 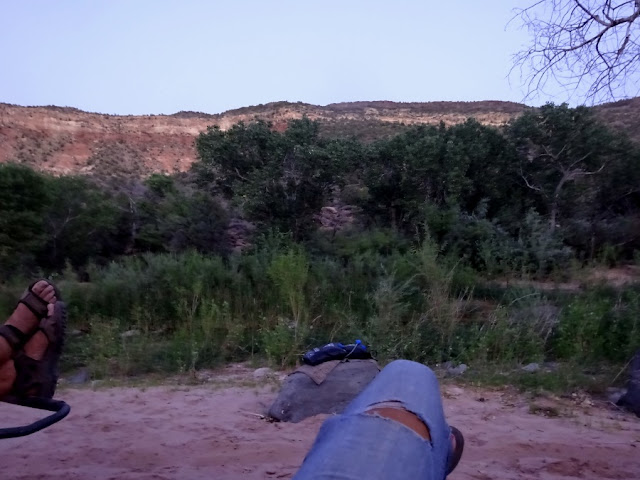 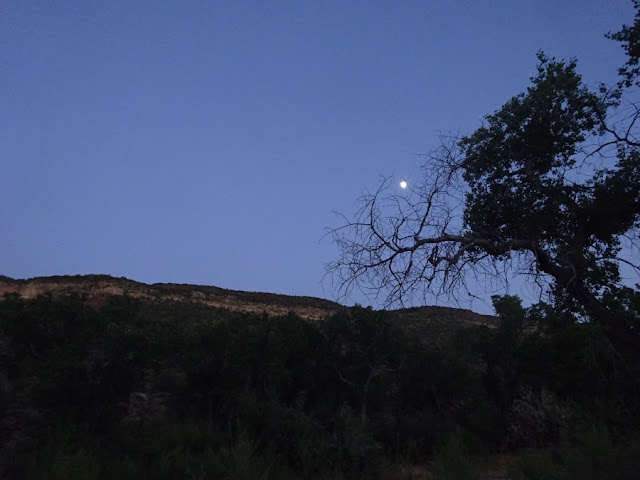 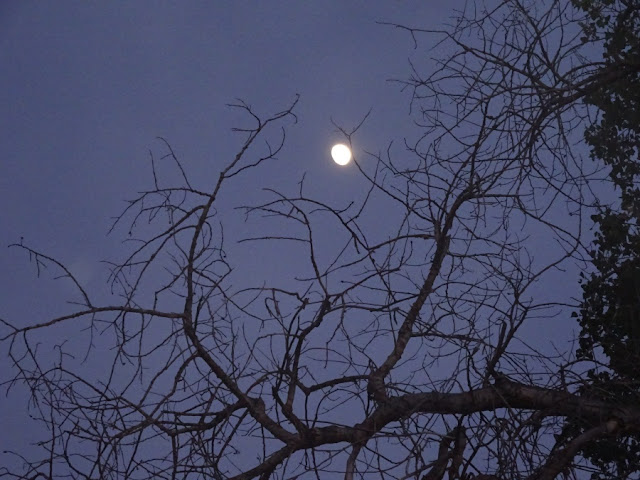 We woke up the next day and the heat was already cooking us inside the van, it was about 90* at 8 a.m. The first thing we...well, Jamie did was start putting up the awning. I was trying to make brekkie but the heat was getting to me pretty bad, I was throwing up and shaking...I was dehydrated, I couldn't stand up for more than a minute at a time. I ate two peaches and was trying to drink water, but the heat was so intense, nothing would stay down. I know it's gross but I'm writing it to warn you about the heat and dehydration, if you're not careful it can sneak up on ya and getcha! I was finally able to stand up long enough to get brekkie made and get some food in my belly, pretty much the rest of my day was spent in the creek. 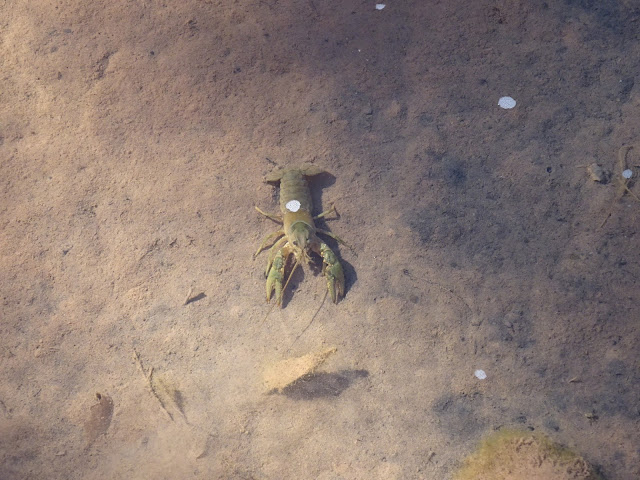 The temperatures are okay for sleeping, if you don't put on any blankets or sheets and have all of the windows open with a fan on. The days are reaching anywhere between 102-114*. 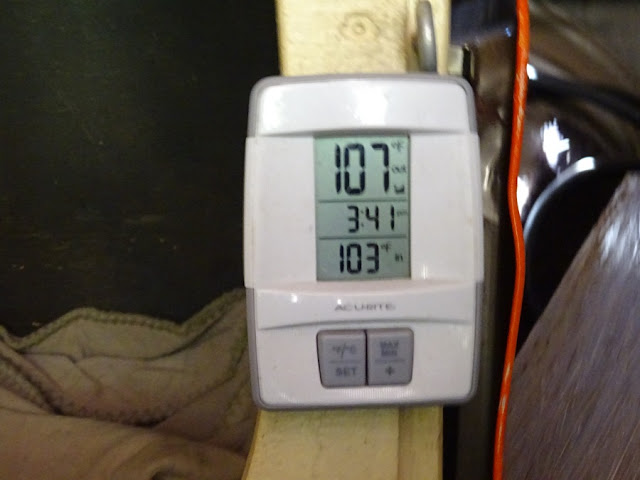 Our awning helps a lot as well as having the creek 10 feet from the van. Even though the girls are not "water dogs", they will come stand in the creek to get cooler, we even saw Savannah walk into the water (on her own) and start swimming around to get cooler the other day, that was an amazing moment!
We are making sure to keep full water bottles in the fridge and drink as much as we can during the day. I'm not sure when we'll do Zion with everything we have going on, as well as the hot temperatures. We've even been tossing the idea around of going to Flagstaff for a month or two then coming back, but we both know if we do that, we won't come back this year. So for now, we are going to stay here at the creek, get all of this stuff fixed and go from there. 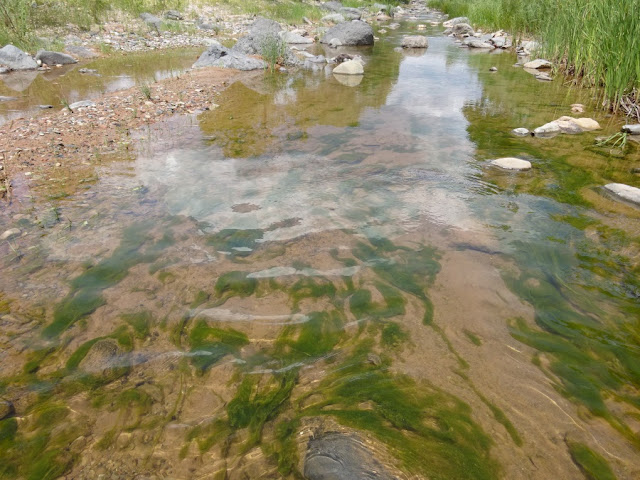 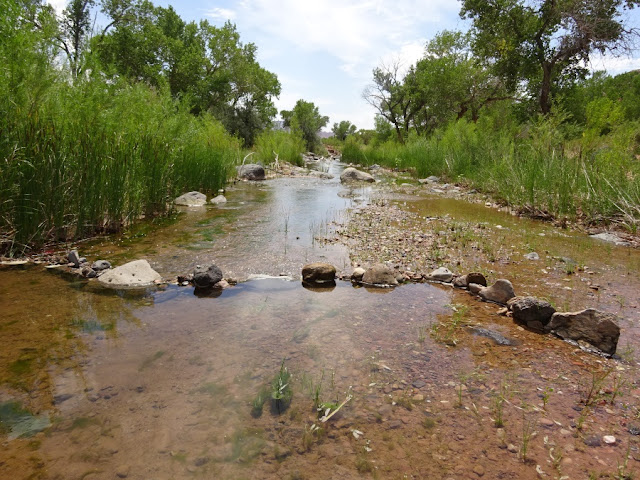