We really enjoyed and liked our spot in Bryce Canyon. We had more privacy than any other spot we've ever camped, that I can remember at least. The crazy thing was that we were only about 2 miles from the entrance to Bryce Canyon National Park and never saw another person, around camp, for almost 3 weeks. Since we were so close to town, there were a few days we hopped on the bicycles and pedaled into town to get on the internet. The temperatures were awesome most of the time, most of the time I wore jeans or leggings, a tank and a light hoodie or cardigan (in the shade). The temperatures sat mostly in the high 70's the entire time we were there...for July, it was perfect! The only thing that pushed us to leave were the food prices. Just to give you an idea here are some examples of items I saw in the general store and around town for sale:

We would buy only what we absolutely needed for groceries, when we needed it. Jamie thought if he drove the 8-10 miles to Tropic, that the prices would be better but they weren't, it was still very pricey...gotta get those tourists to spend that money! After a couple of weeks we decided it was time to pack up and go to Zion, or somewhere close to the park with higher elevation; Bryce Canyon area is about 8,000 feet and I believe Zion sits around 3,550 feet. So the day after my birthday we did just that, it took us a grueling 5 hours to pack... it usually takes us about 3 hours, it was also the hottest day at Bryce that we had had, low 90's. Then a 2 hour drive to Zion. We thought we would hit a Walmart before even seeing Zion but it turned out we had to drive through Zion to get to the town of Hurricane, where the Walmart is. The drive through Zion was incredible, the mountains are HUGE, the roads are narrow; the ranger at the entrance gate had to measure our vehicle with trailer due to the tunnels the park has. 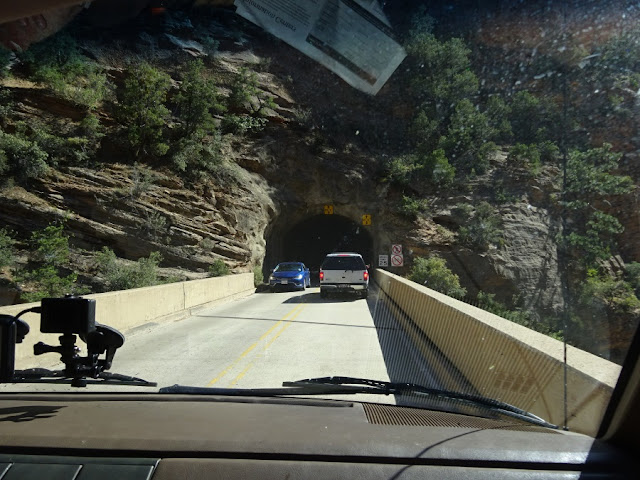 At one point in the drive, the rangers had the road closed off, we thought maybe it was a one way road through the tunnel but then a Winnebago came out, it was then we figured out the Winnebago had to drive down the middle of the road to not take out part of the top of the tunnel or their rig! It's a very beautiful part of this state, I'm sure it will be an epic close to our Mighty 5 journey. If you are not good in tunnels, this may not be your favorite part of the park, the big long tunnel is pretty long since you are driving through a mountain. We drove in the tunnel for at least 5 minutes if not longer...and it's VERY dark!

At this point in our day, we are tired, hot and hungry, we had eaten brekkie but that was 8 hours prior. We get gas, find the Walmart for some light restocking (at normal prices), get everything in the fridge and pantry and are ready to go. We pull out of the Walmart to go look for a camp spot...well that's what WE had in mind, the trailer however decided it was now time to join the circus to become an acrobat, in other words, as we turned out from the parking lot to the main road, the trailer tongue broke away from the metal on the trailer and the trailer flipped! We were going under 5 mph but Jamie had given it some gas to get into the turn, nothing crazy just normal stuff, but that tongue just ripped off of that metal and there went the trailer. 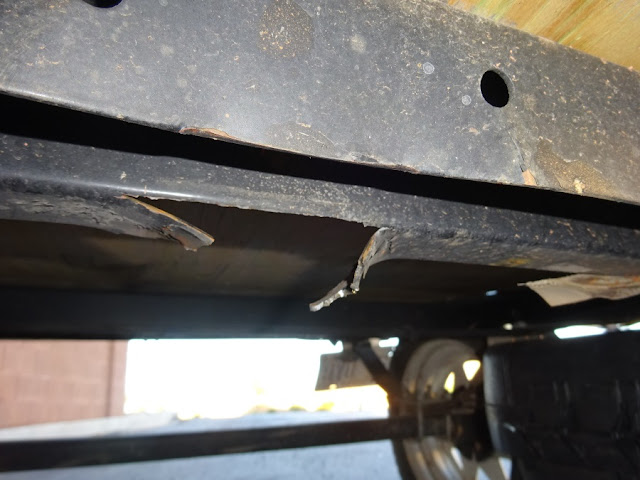 You could feel the jerk of the trailer leaving the van and then I saw the rest of the accident in my side mirror, so we stopped and jumped out, seeing one of the most shocking sights...the trailer on its side with the wheels spinning and stuff spilling from a bin. The tongue of the trailer was still attached to the hitch ball on the van. We tried to flip it back over but even with all of our strength, the two of us couldn't flip it. Thank goodness a super nice guy saw all of this happening and came running to help with the flip, with his help we were able to get it back on the tires and out of the road. I took the tongue off of the van and moved the van off the road as well. Luckily, we were in between the Walmart and Maverick gas station, so there were barely any cars on the road and we were able to move everything over to the gas station by this brick wall. We sat in shock, well I'd say for a few minutes but it was actually a couple of days, but in that moment we needed to fix this, so adrenaline set in and it was fix it time. 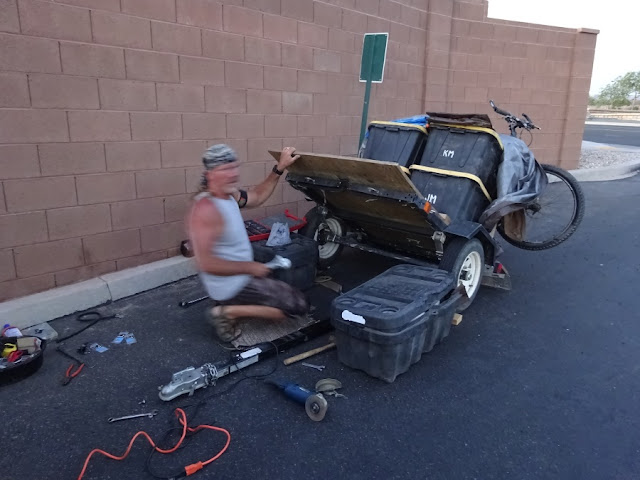 The very first thing I did was start making a plate of food for us both; Rotisserie chicken and potato salad. After we ate, we assessed the situation and Jamie dropped the bicycle to ride to Walmart to get some hardware. Really the situation sucked but we couldn't have been more fortunate how or where this happened. We ran through a 1,000 different scenarios where that could have been a major catastrophe, maybe even fatal, or it could have happened in the middle of nowhere with a hardware store or Walmart 70+ miles away. One guy that stopped to see if we were okay, later that night, said to us after hearing what happened, "No doubt someone in the Universe is watching over us." No doubt is right! We had about 4-5 people stop to ask if we were okay or if we needed help, one guy sat down with Jamie trying to figure out the best method of fixing it, people in Utah are genuinely concerned and nice. 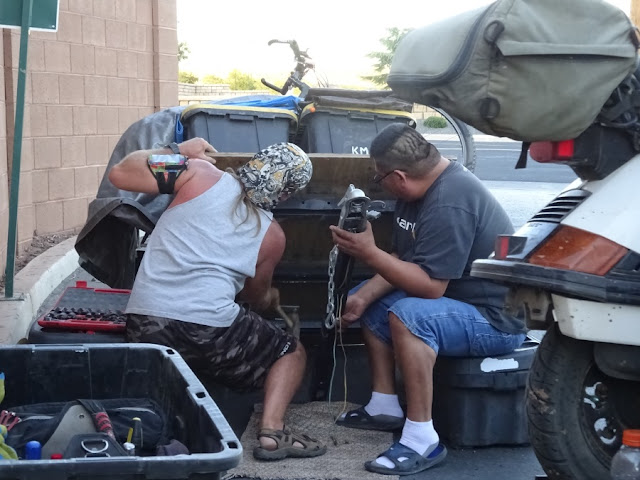 We were also very fortunate to be right across the street from Walmart because when this happened, it was about 7:30-7:45 p.m. on a Sunday, so mostly everything we drove past on our way to Walmart, was already closed. As Jamie was at Walmart getting hardware, I assessed some of the damage with my camera...let's just say, we've got a lot of work ahead of us!
The repair took us into about 10:30 p.m. in 100+ degree temperatures. Jamie ground out the frame to reattach the tongue in a much stronger more durable manor. We're not done but it is pretty sturdy now, we can drive/tow it just as before, but he is going to put some more metal on the front and back of the wood on the trailer so the tongue can't twist again. 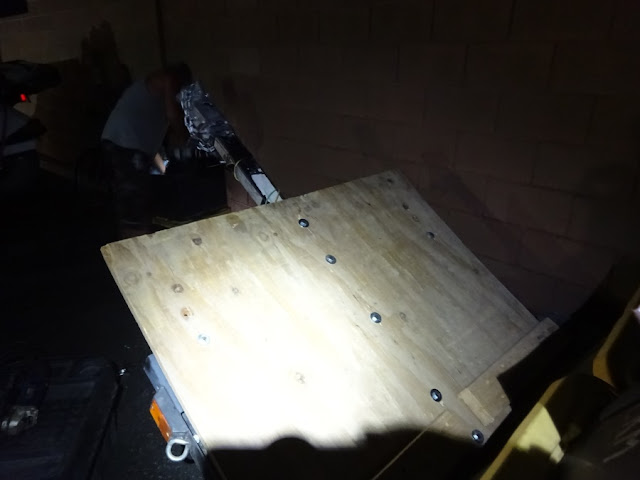 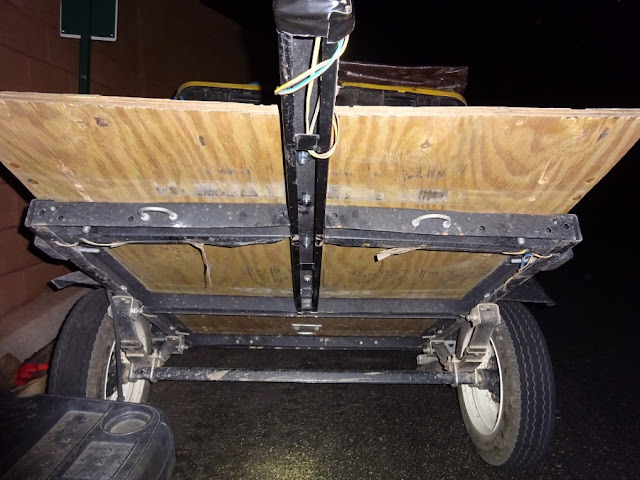 After 3 hours, it's now dark, we're tired and ready to fall into a cozy bed BUT now we have to find a place to park for the night, hopefully not too far from a hardware store or Walmart. Once we do find a spot, we then have to unload everything out of the van (that was taken off the trailer, along with the innards that we always have to unpack) then put the bed down and fill it up...then we can climb into our cozy bed! A Class C is looking pretty darn good right now, haha.
The adventure never ends folks!

We did find a spot after looking in this one area for about 20 minutes. It was really hard to find because it was so dark (no moon), Jamie had to get out with his headlamp on and the Maglite (the big black flashlights police carry) to find the road. At one point, our GPS was telling us to go straight, but there was no straight only left or right....don't always listen to your GPS!!
After finding our spot for the night, we unpacked the van and sat down for about an hour, talking through everything that happened today... we were still in shock and this was the first chance we had to have it actually soak in. I think we finally went to bed around 1 a.m. or so
What a doozy of a day! Hoping tomorrow will be much more UNeventful.

Here is a short video of our day: