Back for more, eh?
Bryce Canyon National Park is such a beautiful and interesting place, why wouldn't you be back!?
Inspiration Point leads to a view overlooking Bryce Amphitheater, the picture you see on most Bryce Canyon maps or booklets. It's pretty awesome! The trail to view this incredible feature is quite steep but short. I had to put my knee brace on for this one.
Inspiration Point at 8,100 ft. 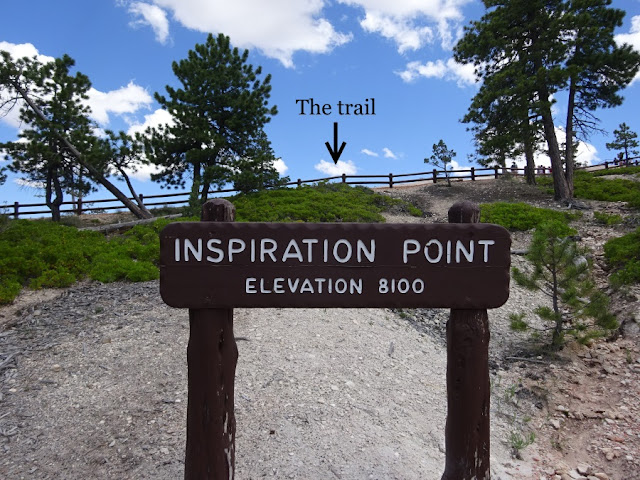 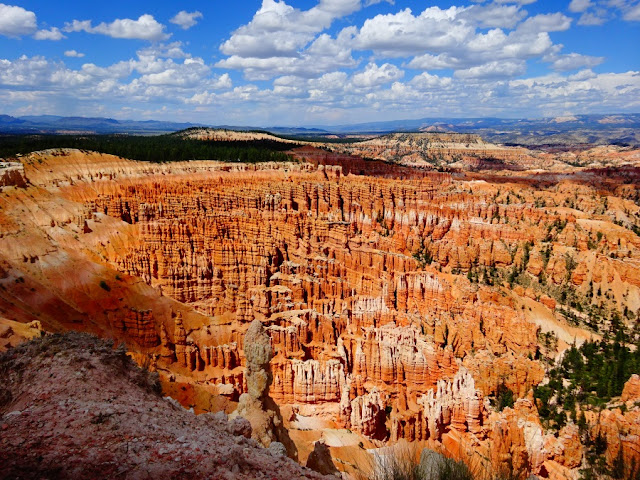 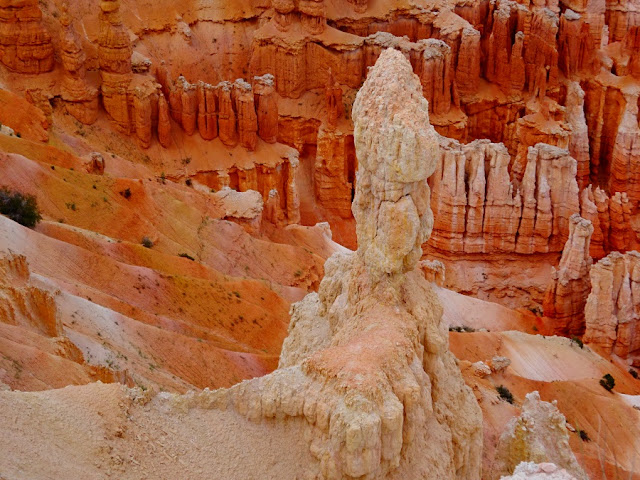 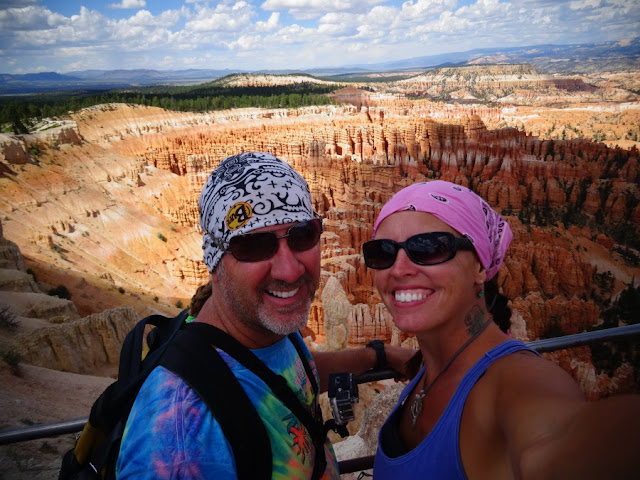 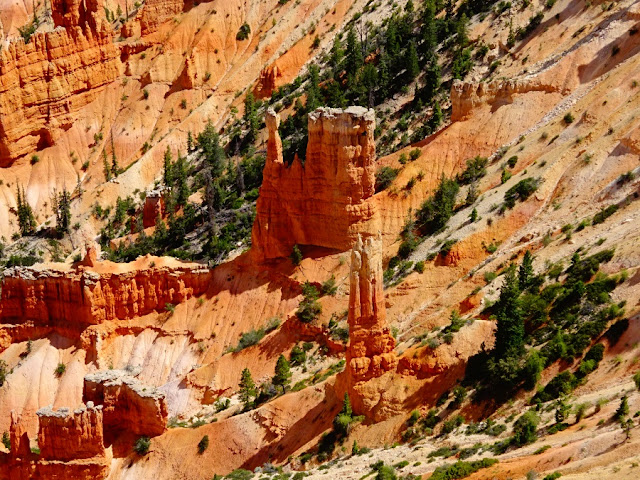 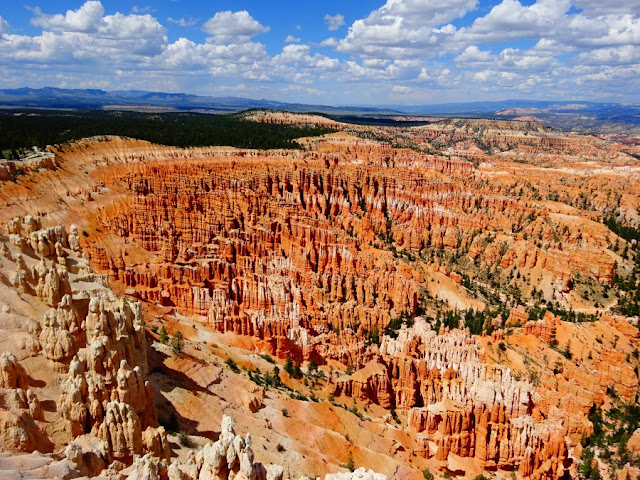 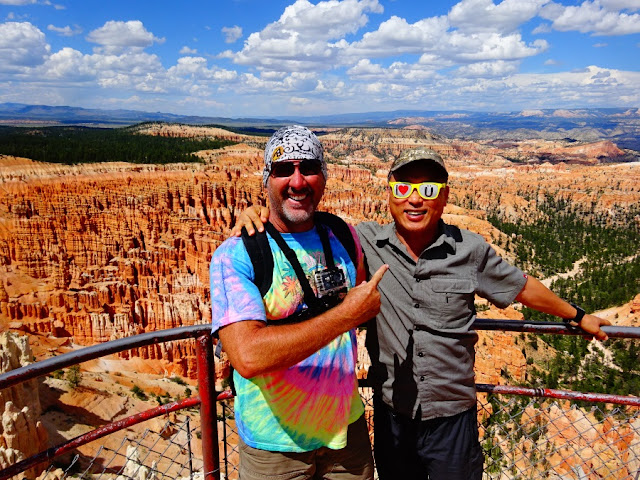 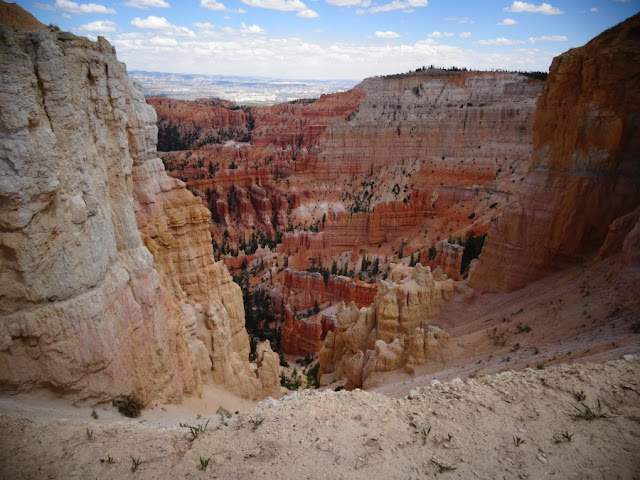 After Inspiration Point, we were both getting to the point where we wanted to do a short hike and call it a day. We looked at the map and saw there was a 1/4 mile hike (just my style), where you walk stream-side to a waterfall. The point is called Mossy Cave and although on the map says it's a part of the park, you actually cannot access it from the park. We figured at this point Mossy Cave would be our finale for the day, so we hopped on the bike and drove the 7-8 miles to our destination. 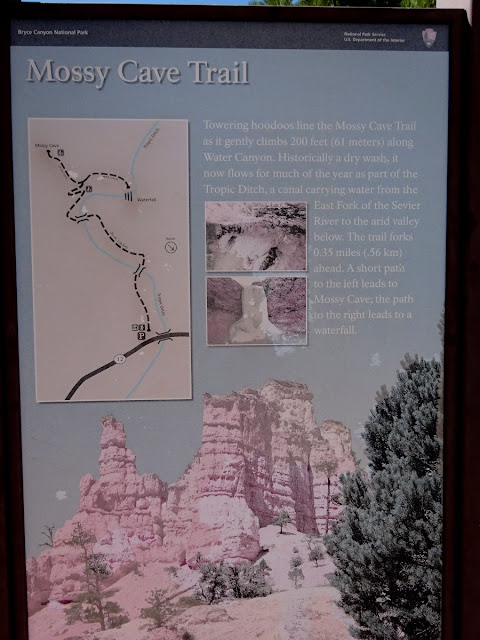 This was definitely my favorite part of the entire day. Instead of looking down on and walking "on top" of the hoodoos, we were on a trail under the hoodoos! We had a whole different view point from underneath, it was just so cool and whoa, what a view! Plus, we were able to walk beside a beautiful fast flowing stream...something we haven't done this whole journey. 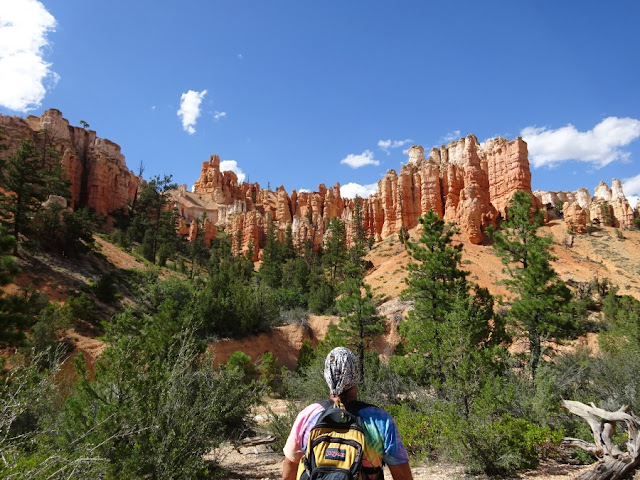 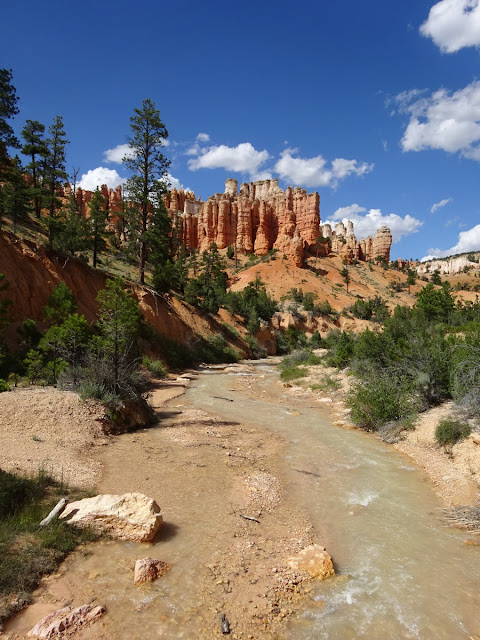 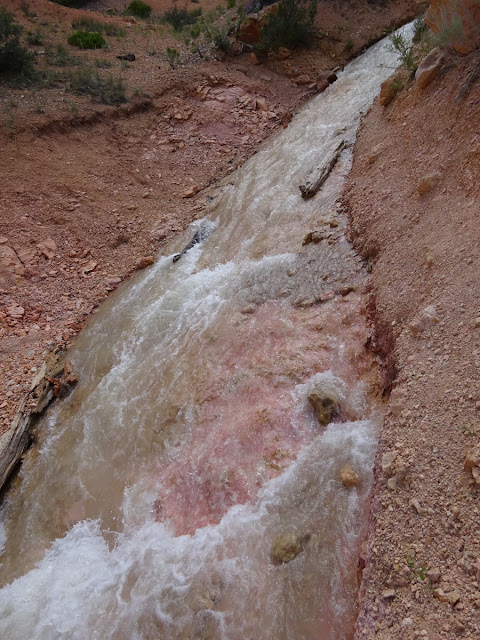 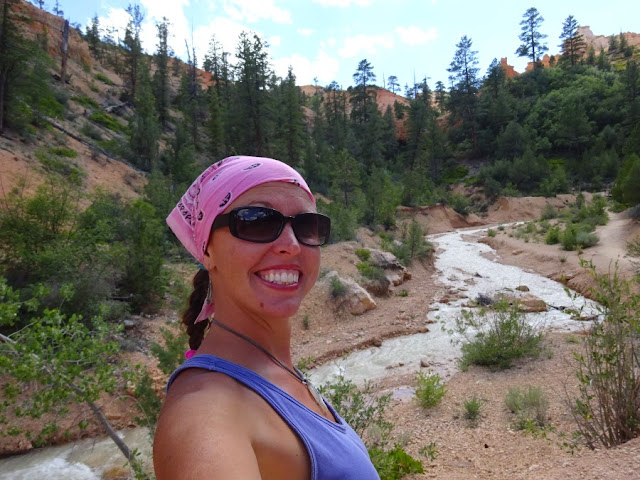 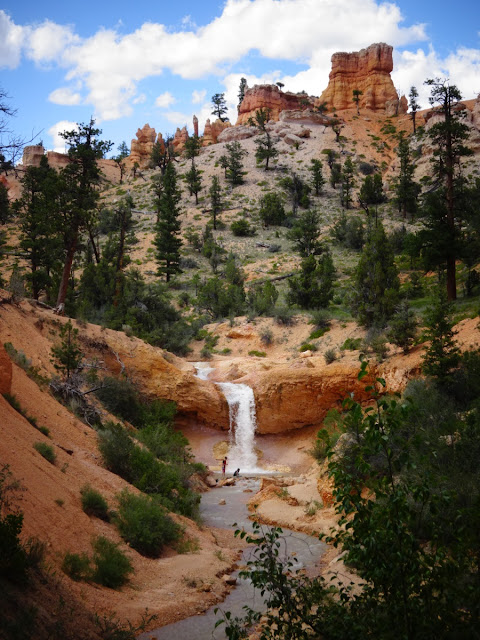 The trail led to a fork where you could turn left to go to the cave or turn right to go towards the waterfall...we turned right! 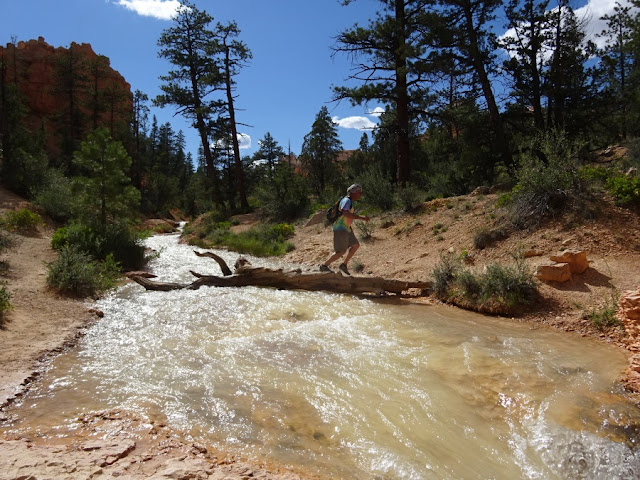 After checking out the waterfall and hiking up this super steep & scary hill, we decided to go back the other way to see the cave. It wasn't much of a walk but it was a little bit of a climb, the trail just angles up. 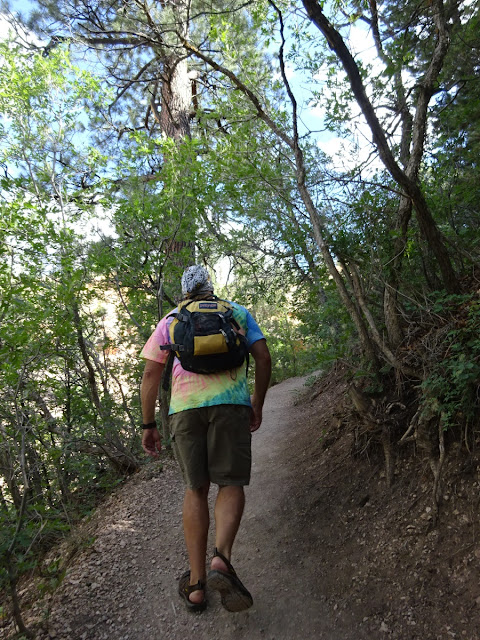 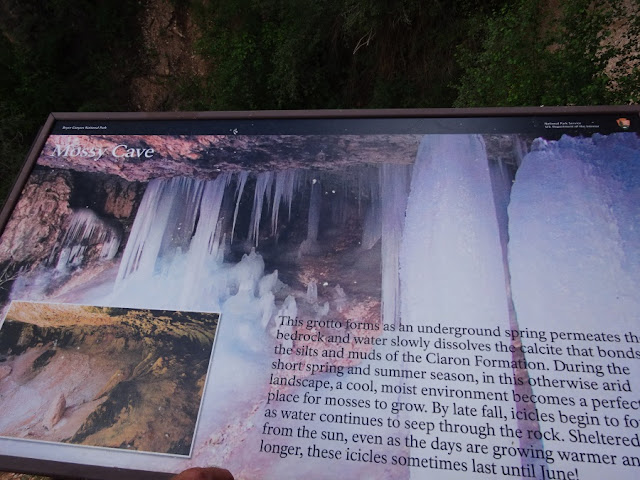 We were expecting a much larger cave...but there was moss in it! 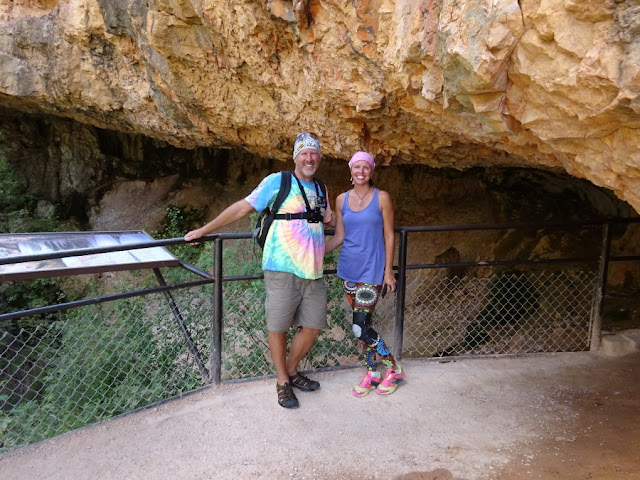 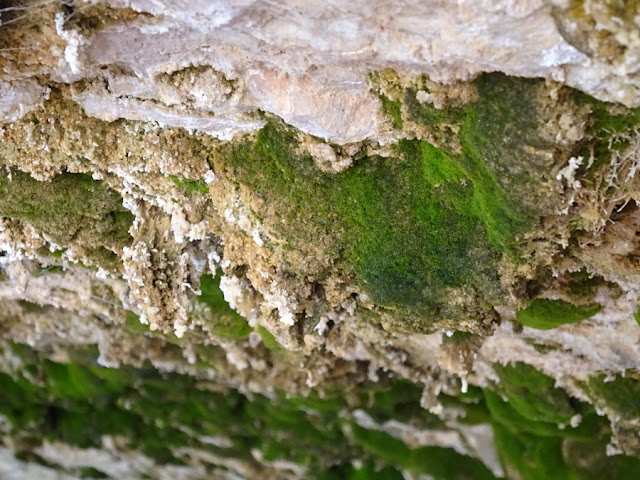 We were having more fun at the waterfall, so we went back to play in the water.
And of course had to get in that waterfall somehow...even if it felt like a million of the strongest hands slapping you down to the bottom of Earth!

I didn't have the right shoes (yes, again) AND I had both cameras so I didn't get under the actual fall, BUT I did go behind it...that was crazy! The sound of the water was deafening, you could definitely feel the force of it just being behind it. 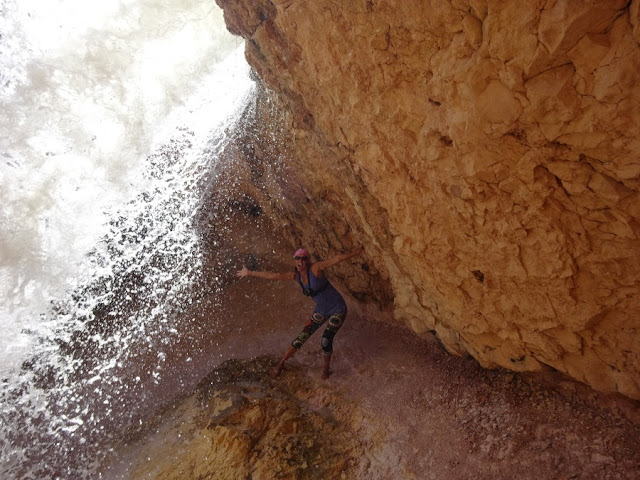 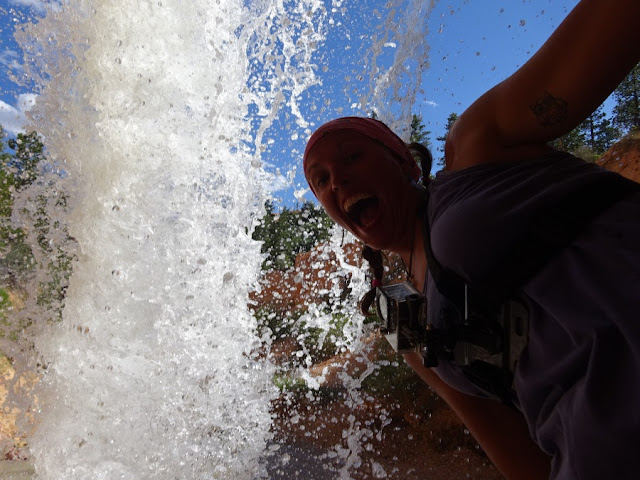 If you want to see a short video of our day, click the video below.