We are getting a little bit better internet connection than we thought we would, so I thought I'd take some time (out of the sun) to update all of you on what is going on down here!

February 4, 2016~ We left Plaster City at about 11 or so in the morning. Thinking we were going to be sitting in line at the border to cross over for at least an hour, we wanted to make sure to get there early enough that a couple of hours wouldn't hurt us in any way. When we arrived at the border, we had no wait time and drove right into where Border Patrol stopped us to check the van and our papers. There was a Mexican man and woman that asked if they could see inside of the van and asked for the registration for the dirt bike. In all of my preparation for the trip, the last thing that crossed my mind was registration for the bike! We knew where it was but couldn't find the bag it was in, so we started tearing things out of cabinets, out of the netting, little cubby-holes, etc. After about 20 minutes of the guards seeing everything in the van being pulled out of every hole we have, we think they grew to have pity on us and finally said to Jamie, "It's okay man but next time you cross over, you have to have it." And they waved us through.


Once we crossed over, we definitely knew we were in a different country. Every sign is in Spanish, people are everywhere on the street corners, in front of your vehicle trying to sell things like fruit and other food, doing acrobatics, break dancing, singing, yelling, trying to wash your windshield...everything for money. We saw Jesters, jugglers, a guy on crutches with one leg dressed as a clown...it's really something to see and they don't take "No, gracias", very easily...they are very persistent. The houses you see while driving down the road, right across the border, are very small, broken down little shacks. It's amazing that people live in them and live like they do but I guess if that's all you know, then that's how you live.

We decided we would drive through to San Felipe. We knew that it was about 2-2 1/2 hours from the border to San Felipe, so maybe we would stay if we liked it or drive on if we had itchy enough feet!

We arrived in San Felipe around 2 p.m. and drove around looking for the water, which is the Gulf of California (Mar de Cortes). We wanted to walk around, see the town, maybe exchange some money. We drove through town, it's not very big so it was quite easy to find the water. It was a very, very windy day so maybe not the perfect time to walk around town.

We parked for a moment so Jamie could use the restroom (our toilet was buried in all the stuff that got pulled out at the border), he ended up paying .50 cents to an attendant to go in and we decided to move on.

We wanted to exchange some American dollars for Pesos, so we stopped in at an Oxxo (the Mexican version of 7-11), where we had seen a sign that said 17.00 dolar. We thought the sign meant they would exchange the money to Pesos, like a regular exchange, but after trying several attempts to have a conversation with a young girl that spoke no English paired with my poor Spanish, another customer who spoke a little bit of English told us that we would have to buy something to be able to change it over. We needed a Baja map, which they did not have, so we left and drove back into town to an actual exchange place.

We learned another valuable lesson when we did our exchange...we should have probably switched some of our American dollars before crossing into Mexico, due to the exchange rate being 18.50 in America, the day we left, but 16.85 once we were in Mexico...you live and you learn! When we were done with the exchange, I asked the girl if there was a Walmart or Costco in town and as she shook her head NO, she gave us a big giggle ...she must have thought I was crazy! She then told me that there is a Calimex and a Bodega in town, so that was helpful.


We wanted to make sure to fuel up before driving any further so we stopped at a Pemex gas station. I think every gas station in Mexico is Pemex and they are U.S. certified so it was good knowing we weren't getting "'crap-gas". At the Pemex you have an attendant that pumps your gas for you and will wash your windshield. We asked before the attendant started pumping if they accepted American dollars, he said, "Yes, but I will give you Pesos for change." Perfect! Even though we may lose a dollar or two here and there, it was good knowing we could exchange this way instead of having to find an exchange place in every town with a different rate. We made sure not to get swindled so we busted out our handy dandy calculator and did the math ourselves. It worked in our favor to have the calculator, because once he saw it, he recounted the money and took more money out of his pocket to not short us (we were about to get shorted 100 pesos).

We drove the rest of the day. The road leaving San Felipe driving South (Hwy 5), was actually a really great road, all paved. I think we both were expecting a much worse road, maybe all gravel, not graded, but it was all paved. The only thing I can say about that road is you have to watch your speed due to a stretch of about 25 miles or so, that if you don't slow down, the big bumps in the road (not speed bumps, more like waves in the asphalt) will bounce you around and scrape front and back bumpers! The first one we hit, doing about 45 or 50 mph, didn't look like much but once we went over it, we bounced up, down, scrape, scrape, bounce, scrape....we learned to look at the roads much closer after that.

I had done a lot of research on camping spots before we left, on www.freecampsites.net, and had written down a spot that was just outside of Puertecitos (which we were just passing through). The Sun was starting to set and since we had heard from everyone and their mothers, brothers and Aunts not to drive at night, we punched in the coordinates to the spot called Sur de Volcan Prieto.
Coordinates: N 30.207416 W -114.664531

We drove through the teeny tiny town of Puertecitos, on a dirt road, which looked like it was deserted but people live there...still learning that people live in these shacks with tarps for walls and roofs. I wish I had more pictures but I was working the video camera and my camera, so I just have the one below. We saw a store at the top of this hill and thought we would stop in to give them business and buy something to drink but once we drove up to it, noticed all of the windows were broken out and the building was empty, so much for that idea!


We drove up a hill to a paved road, that happened to be Hwy 5 (again) not sure how we were detoured off of it to drive through Puertecitos on the dirt road, but we were back on the Highway now.
Fortunately, the GPS found the coordinates to Sur de Volcan Prieto...we were wondering if it would due to not having Mexican maps on it! The GPS took us straight down to the exact spot that was on www.freecampsites.net and since I had seen pics on the site, knew we were in the right place. 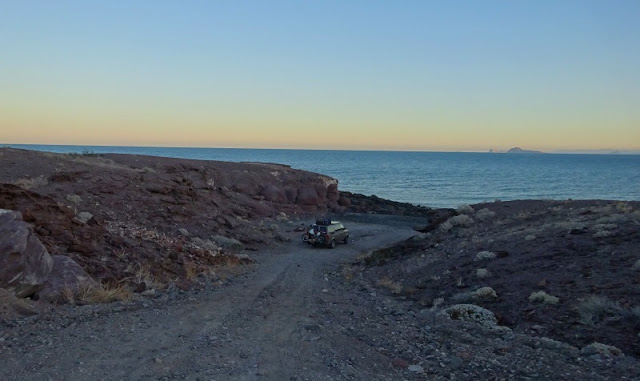 It is a beautiful spot. It's a private, quiet spot in between two rock outcroppings right on the water. There are volcanic rocks everywhere and other big rocks the dogs were just loving and climbing all over.


There was a little bit of trash and some bones from animals that didn't make it but nothing too extreme. The only 'extreme' thing I saw were the carcasses of these fish and the size of their teeth!! I just don't think that's right! haha


Even with being about a 1/2 mile from the Highway, we couldn't hear any road noise, so that was another great plus.

We enjoyed our sunset or what we could see of it since the sun set behind the hills. We would definitely get one heck of a sunrise though, right over the water. 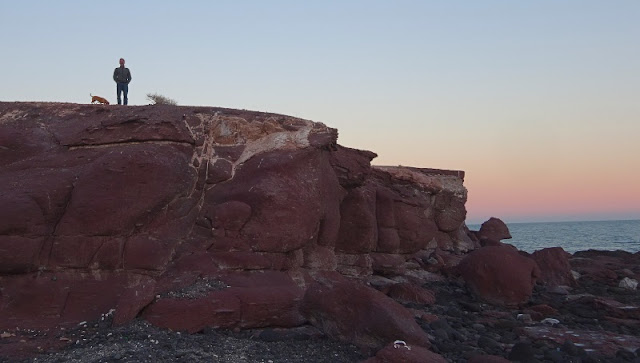 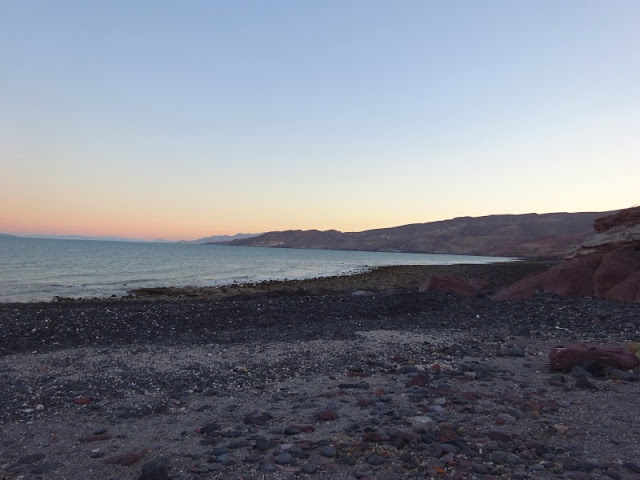 It was a great first day in Mexico. We learned a lot and I am finally using my Spanish that I learned in high school all those years ago...or what's left of it in my brain!
Stay tuned for more Mexican adventures!

If you want to see what our day was actually like, you can watch the video below!
https://www.youtube.com/watch?v=sSzXiGedHiE

We love new subscribers!!
PEACE
Posted by Unknown at 4:30 PM